If you’re a fan of Rear Window on screen, you’ll award WRONG WINDOW a perfect 10!  A barrage of gag-filled dialogue.  Knee-slappingly funny from start to finish!

Five Performances:  May 1-3, 8 and 9 at the Anderson Center Theater

Auditions will consist of cold readings from the script.

Auditions Announced for HONK! the Musical at Beechmont Players

Beechmont Players, Inc is excited to announce auditions for their production of HONK! the Musical.

HONK! is a musical adaptation of the Hans Christian Andersen story The Ugly Duckling and winner of the 2000 Olivier Award for Best Musical.

Performances will be held at the Anderson Center Theatre

To sign-up for an audition slot, please visit:
https://www.signupgenius.com/go/10C0E44ADAB2EA0F58-auditions

Walk-ins will be seen when a slot is available

FATHER OF THE BRIDE

Beechmont Players has announced the cast of their upcoming production, BORN YESTERDAY. 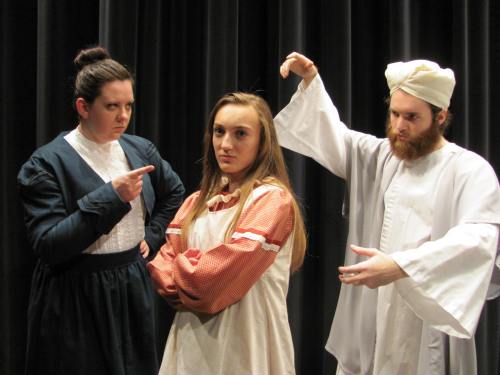 The cast of Beechmont Players soon-to-open Cincinnati production of the musical THE SECRET GARDEN got a special glimpse into the show’s beginnings when original Broadway cast member Teresa De Zarn spoke to them before rehearsal last Friday night.

Teresa was with the show much of the way, from backer’s auditions to the Broadway run.  Originally cast as Rose, the young orphan Mary’s dead mother, a family emergency took her away briefly, but she was invited back before the show opened on Broadway to take an ensemble role and understudy both Rose and Rose’s sister Lily.  On opening night, Rose was unable to perform, so Teresa was able to premiere her original role for the show’s first night on Broadway at the St. James Theater.  That cast included Daisy Eagan as Mary Lennox, along with Mandy Patinkin, Rebecca Luker, Robert Westenberg and John Cameron Mitchell.

“It was an exciting process,” Teresa told the cast.  “During the backers’ auditions, the songs were changing constantly as the writers firmed up the show.  I was there from the beginning, and got to be part of our five-minute excerpt at the 1991 Tony Awards (introduced and narrated by Julie Andrews!), when the show won for Outstanding Musical.”

Teresa started her Broadway career in CATS (playing Sillabub and Grizabella) and was in THE THREE-PENNY OPERA (with Sting) before doing THE SECRET GARDEN.  She later played Gueniviere in the national tour of CAMELOT and Christine in the international tour of PHANTOM OF THE OPERA.  She returned to Cincinnati, and today runs the theater program at McNicholas High School, where her theater career took root as a freshman in 1972.

THE SECRET GARDEN began as an enchanting classic of children’s literature, and has become a brilliant, innovative musical. Orphaned in India, 11 year-old Mary Lennox returns to Yorkshire to live with her reclusive, uncle and his invalid son. The estate’s many wonders include a secret garden which beckons the children with haunting melodies and spirits from Mary’s past who guide her through her new life, dramatizing a compelling tale of forgiveness and renewal.

The show is currently preparing for a Spring, 2017 regional tour before coming back as a Broadway revival. But you can see it now–Beechmont Players’ production opens Friday, February 17th and runs through February 25th.  Information is available at www.BeechmontPlayers.org.

Director Joey Schnell says “I love this show, but it’s only rarely performed.”  He and Teresa agree that “It’s a powerful show,”  and Teresa adds, “if you’re a romantic you need to see it.”