THE DROWSY CHAPERONE Runs April 29-May 8

With the houselights down, a man in a chair appears on stage and puts on his favorite record: the cast recording of a fictitious 1928 musical. The recording comes to life and The Drowsy Chaperone begins as the man in the chair looks on. Mix in two lovers on the eve of their wedding, a bumbling best man, a desperate theatre producer, a not-so-bright hostess, two gangsters posing as pastry chefs, a misguided Don Juan and an intoxicated chaperone, and you have the ingredients for an evening of madcap delight.

Greg and Kate have moved to Manhattan after twenty-two years of child-raising in the suburbs. Greg’s career as a financial trader is winding down, while Kate’s career, as a public-school English teacher, is beginning to offer her more opportunities. Greg brings home a dog he found in the park—or that has found him—bearing only the name “Sylvia” on her name tag. A street-smart mixture of Lab and poodle, Sylvia becomes a major bone of contention between husband and wife. The marriage is put in serious jeopardy until, after a series of hilarious and touching complications, Greg and Kate learn to compromise, and Sylvia becomes a valued part of their lives.

This second annual festival was twice postponed due to COVID-related concerns, but now it is finally time for the Cincinnati Storytelling Festival to, once again, take flight. As a partnership with the Cincinnati Parks Department, this year’s festival will be held entirely outdoors with free admission to all four programs (donations are welcome via our website, or via cash, card or venmo at the festival) in the park outside the Westwood Town Hall.

Adam Booth‘s original stories blend traditional mountain folklore, music, and an awareness of contemporary Appalachia. As a nationally touring artist his professional telling appearances include premiere storytelling events across the United States, including the Kennedy Center Millennium Stage, the Timpanogos Storytelling Festival, the International Storytelling Center, the National Storytelling Festival, the Appalachian Studies Association Conference, the National Storytelling Conference, the National Academy of Medicine, and as a Spoken Word Resident at the Banff Centre (Alberta, Canada). He is a member of the Recording Academy and his recordings have received a Parents’ Choice Gold Award, two Parents’ Choice Silver Honors, and four Storytelling World Awards and Honors. He is a four-time champion of the West Virginia Liars’ Contest. Adam is the inaugural Storyteller-In-Residence at Shepherd University. http://www.adam-booth.com/

Paul Strickland has been a Cincinnati Favorite since moving here in October of 2014. Most of Paul’s stories were told to him by his Ain’t True and his Uncle False, who live in Big-Fib Cul-de-sac, a small trailer park just off the coast of Factual in the mythical American south. His hilarious and heart-felt tall tales have won “Best of Fest” over fifteen times at Fringe Festivals in the U.S. and Canada. Strickland has performed at theaters, festivals, comedy clubs, and more, including two prisons, where he was not an inmate at the time. Selections from his show Levels of Difficulty can be heard on XM Sirius radio.  www.AintTrue.com 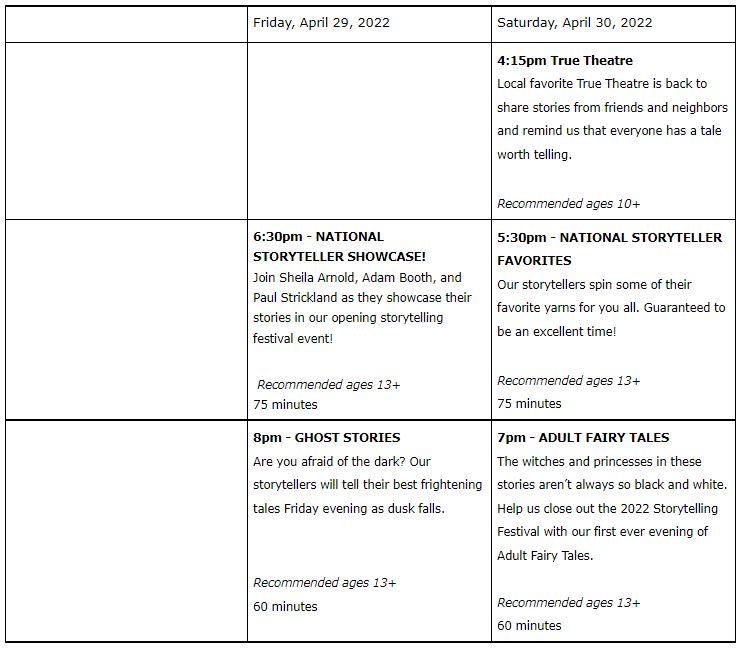 DONATION AND INFORMATION
Please visit our website at cincystoryfest.com to find more information.

The purpose of the Cincinnati Music Theatre Scholarship Program is to encourage and promote the study of theater arts at the collegiate level, particularly musical theater, in both performance and production.  Importantly, the CMT Scholarship Program is intended to give back to the Greater Cincinnati area through the support of academic study in recognition of the years of dedicated public interest and support of CMT productions.

CMT, through its scholarship program, will recognize outstanding Cincinnati-area high school seniors who have excelled in various aspects of theater production and/or performance during their high school career and will pursue a college degree in theater arts or theater-related music performance, production or education.

Any high school senior with at least a 3.0 GPA (4.0 scale) in the Greater Cincinnati area intending to enter college in the following year to study theatre/musical arts is eligible to apply.

Applications must be received by either postal mail or email by April 22, 2022 with no exceptions.

Visit https://cincinnatimusictheatre.org/ and scroll down for Scholarship Program Application Information.

The Mason Community Players have a new and permanent home at 5529 Mason Rd. in Mason, OH. This home, affectionately named the Mason Community Playhouse, thrives with a vibrant new energy. The group continues to work tirelessly on renovations to create the best possible theatre experience for the Mason community. They have just completed performances of their first show in the 2022 season, Belles, which ran during March and are excitedly anticipating the rest of this year’s season.

Currently, the Players are busy in rehearsals for their next production, YOU HAVE THE RIGHT TO REMAIN DEAD. This ten person cast will deliver a hilarious murder mystery with an audience participation component. This show is sure to entertain audiences from start to finish and have people guessing from the time they walk into the door until the final curtain.

As the Mason Community Players look to their 50th birthday celebration in 2023, they are thrilled to be spending it at the Playhouse. The Players began performing live in the Mason Community Playhouse in November of 2021. The 2022 season will continue with Nunsense and Nunsense Amen! in July, The Yellow Boat in September and conclude with The Last 5 Years in November.

The Mason Community Players maintain a presence online through Facebook and at their website. Tickets are now available by leaving a message at 513-398-7804 or visit the website
www.MasonPlayers.org.