Bracha Weissman has transformed herself into an emotional recluse – her identity defined by the loss of her family in the Nazi death camps she miraculously survived. Her attachment to the past has estranged her daughter Rifka, who wants to get on with the life of a modern day mom in California. Bracha’s armor begins to crack when Ann Meshenberg appears one day to take her oral testimony for a video archive. Ann, the daughter of Holocaust survivors, has her own agenda: the need to ask a stranger what she could not ask her parents. What begins as a simple history project becomes a story of mothers and daughters forgiving and being forgiven.

This contemporary acting workshop taught by area theatre favorites, Jared Joplin and Miranda McGee, begins with group/ensemble work and continues into duet scene study using cutting edge contemporary scripts from The New Play Exchange.  This class provides you with a fantastic opportunity to hone your acting skills, add new tools to your acting toolbox and get a glimpse of what’s new in American Theatre! The class meets for six 2.5 hour sessions, with an invited performance for the final session on Know Theatre’s Underground cabaret stage.

We understand that schedules are tough and plans change. If you have more than two absences, you’re more than welcome to keep attending the class, but know your scene work will be reassigned.

The Advanced Acting workshop is for those that have taken our Contemporary Acting workshop or for actors wanting to take the next step in advancing their skills.  Work with methods from prominent theatre practitioners (Stanislavski, Meisner, Kaiser), explore Chakra work and analyze complex contemporary scripts and classical texts.  In addition, Miranda McGee and Jared Joplin will work with you to build an audition package that challenges you and highlights your skills… just in time for Audition Season!  The class meets for six 2.5 hour sessions, with an invited performance for the final session on Know Theatre’s Underground cabaret stage.

We understand that schedules are tough and plans change. If you have more than two absences, you’re more than welcome to keep attending the class, but know your scene work will be reassigned.

Loveland Stage Company’s GYPSY is All About Family

Melinda Hubbard playing Mezzapa shares the stage with her daughter Mearen who is in the children’s ensemble. 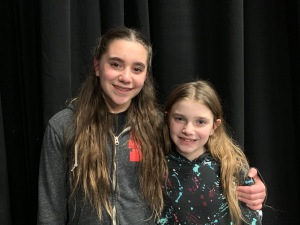 GYPSY features music by Jule Styne and lyrics by Stephen Sondheim and is presented in cooperation with Tams-Witmark.

BLUES FOR AN ALABAMA SKY presented by Falcon Theatre through Feb. 8. I attended the opening Saturday performance.

Bryana Bentley as Angel and Elizabeth Taylor as Delia. Photo by Kristy Rucker

For the new year, Falcon takes its audience to Harlem in the summer of 1930 for the engaging drama BLUES FOR AN ALABAMA SKY. This strong script touches upon several social issues that are still prominent 90 years later: racism, birth control/family planning, and homosexuality.

Producing Artistic Director Ted Weil’s set, featuring two small apartments separated by a hallway, is one of the most ambitious and well executed sets I’ve seen at Falcon. The two spaces are smartly furnished with great attention to detail. With Falcon’s limited play area, there were times when the tight quarters made for some awkward character crosses.

The five-person ensemble is well-cast and handles the material nicely. Director Torie Wiggins makes good use of the space and creates some beautiful stage pictures. There are some quiet, touching moments and the confrontational scenes had a nice bite to them. On Saturday night, the more conversational scenes lacked energy and could have used a bit more drive.

Saturday, February 22, 2020, La Comedia will be holding auditions for our production of SEUSSICAL JR.

Kids ages 7-17, start getting prepared for an exciting summer!

Auditions will begin with sign-ups at 9:00 a.m. At 9:30 all auditioners will learn a song from the show (music will be provided) and after everyone has sung we will have call-backs with some auditioners being asked to read. Script readings will be provided.

The cast will be notified by phone on Wednesday February 26, and roles must be accepted with registration and payment by Wednesday March 4.
Auditions are free. If cast in the show, cost is $210 (includes T-shirt).

A Final dress rehearsal will be held on the morning of Saturday June 27, beginning at 8:00 am.