The ROYAL Theatre Company is thrilled to announce our next show, “ROYAL Night on Broadway” featuring Chris Lee from the cast of Hamilton! In this unique event, young singers will perform some of Broadway’s best with this Hamilton star! This dynamic evening will showcase the brilliance, inspiration, and magic of musical theatre!

We hope this message finds you healthy and well. These are certainly strange times that we are living in and navigating through. Unfortunately, due to the COVID-19 pandemic, the ROYAL Theatre Company Board of Directors has come to the very difficult decision to cancel our summer camps and fall classes for the remainder of 2020. We are very sad to have to make this decision, but we know this is the right decision to make to preserve the integrity of the experiences that we want students to gain from our classes and camps.

Please don’t worry, we are NOT going away. We are using this time to assess and redesign our class curriculum for new and exciting growth opportunities. ROYAL Theatre Company will continue to share updates and information about future opportunities to get involved with us via our social media channels. Be sure to like us so you get the most up-to-date news!

Please know that we genuinely appreciate your interest and support of ROYAL! We miss seeing our young friends, but we know that we’ll be back together again soon!

Wishing you well,
ROYAL Theatre Company Board of Directors

ROYAL Theatre Company is honored to host a live Virtual Masterclass featuring actor, singer, dancer, and musician, Chris Lee. You don’t want to miss this exclusive opportunity to talk with and learn from this amazing star! You’ll have a chance to learn about Chris’ journey, perform a song of your choice, and gain helpful advice from Chris on how to succeed in the entertainment business. To ensure a highly personalized experience, we are limiting the class to 15 students.

NOTE: To participate in this masterclass, you must be between 12 – 24 years old and have access to a device that can join a Zoom meeting. 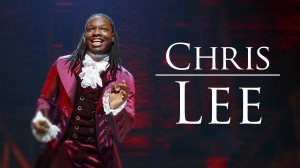 About the Instructor, Chris Lee: After attending Belmont University, Chris was cast as Marquis de Lafayette and Thomas Jefferson in the Broadway smash hit Hamilton in Chicago. He is currently a series regular on CW’s new hot show, Legacies, playing the role of KALEB, a vampire. He also has a recurring role on Showtime’s The Chi and has guest-starred on many shows including Empire, S.W.A.T., Whose line is it anyway? and more!

When he is not on stage, he is writing and performing his own music. In 2018, he released his debut EP “In My Feelings.” He has since released two singles, “Adios” and “Intruder Alert,” and his debut album 1000.

Chris Lee will shine a light on the world of Broadway and television by sharing his own journey from high school, to college, to Broadway and TV. He’ll share an insider’s scoop on the pros and cons of the entertainment business.

Students will have the opportunity to perform individually and receive advice and encouraging guidance from Chris. Each student should come prepared to sing a 1-minute cut of a song of their choice, however, keep in mind the song should be rated PG.

At the conclusion of the class, students will also have an open Q&A session allowing Chris to share his insights and industry tips.

If you’ve ever wondered what it’s like to work in the entertainment industry and how to get there, this masterclass is for you! Don’t miss out on this exclusive opportunity – registeration opens May 11 at 10am!

INTO THE WOODS Cancelled at Royal Theatre Company

We miss you all so much! We hope this message finds you doing well. The times we’re in seem filled with uncertainty and stress, so we hope that despite all of this, you are able to enjoy some extra time with your families. This is the time for all of us to rally around each other, albeit we may “rally” virtually instead of in person, but we’re able to support each other nonetheless.

We’ve been struggling with how to proceed with the show with everything that’s been going on with the coronavirus. With the daily changes in the size and scope of gatherings that are allowed, it creates a tough situation for us and our theatre to venture into the unknown and hope that we’re making the best decisions for the health and well-being of everyone involved.

At this point, there are more unknowns than knowns, but the CDC has recommended that no groups of 50 convene through at least May 10. It seems we’re on a trajectory for a much longer-term ban on group gatherings than we had hoped. It truly breaks our hearts to make this decision, but we feel that the most responsible decision is to cancel our spring show INTO THE WOODS. We’ve consulted with the ROYAL board, and although we’re all devastated by this, they agree that it’s an unfortunate decision we need to make to ensure the safety and well-being of our entire ROYAL family and audience members.

We wish things were different. We wish our community, as well as our country and other countries, didn’t have to deal with the coronavirus pandemic. It’s hard on all of us. One thing we do know is that the ROYAL family cares for one another and our community, and we are resilient! We will get through this time together. Let’s all stay connected and support each other through phone calls, email, texts, social media, group chats, and any other sources that help us to be there for each other.

Take care and stay safe,
Karen, Dirk, and the ROYAL Board of Directors

We have been closely monitoring the Coronavirus (Covid-19) recommendations from our local, state, and federal leaders to ensure that we maintain a safe environment for all our students, actors, directors, and volunteers. The Ohio Governor’s Office just announced that all Ohio schools will be required to close as of the end-of-school-day on Monday, March 16 through at least April 3.

As a result, we are going to follow our state government’s lead and CANCEL all Into the Woods rehearsals between March 16 – April 6.

Please know this is a hard decision for us to make, but we believe it’s the right one. The safety and well-being of everyone in our ROYAL family is of utmost importance to us, and it is our responsibility to do our part for the good of all. Although we had already ramped up our cleaning regimen when we learned of the virus, we will take measures to have the studio thoroughly cleaned and sanitized while it is closed.

As you know from the news coverage, this is an evolving situation that we will continue to monitor on a daily basis. At this point, it is our hope that the show will still go on, but rest assured, the safety and well-being of everyone in our ROYAL family is our top priority. We will continue to monitor the situation and take guidance from our local, state, and federal officials to make any future decisions regarding rehearsals and our performances. We will be sure to keep you informed of any future changes/decisions that need to be made.

Here are some helpful links to stay on top of what’s happening with the virus and recommendations to prevent its spread:

We wish good health for all of you, and we’ll look forward to seeing you again soon!

ROYAL Theatre Company Board of Directors