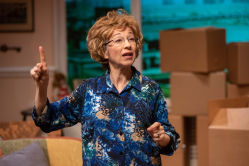 CINCINNATI (March 22, 2022)—Many fans of talk shows and pop culture recall Dr. Ruth Westheimer as America’s favorite sex therapist in the 1980s and 1990s, rewriting the playbook on what can and can’t be discussed on the air with strangers. But few know the story of her remarkable journey. Beginning April 9, BECOMING DR. RUTH will narrate the inspiring details of her life in an illuminating one-woman show presented by the Jewish Foundation of Cincinnati. The show runs April 9 through May 15. Opening night is April 14.

Dr. Ruth Westheimer gave people a new way to view themselves and their relationships. Yet there is much more to her story that will resonate with today’s audiences. In this heartwarming portrait of her life, she narrates fascinating details from her early life–from the tragic separation of her family during the Holocaust to her experiences as an Israeli sniper—as well as struggles with balancing work, higher education and single motherhood in America.

Director Stephen Nachamie will transform the Rosenthal Shelterhouse Theatre space into Dr. Ruth’s home to help the audience “glimpse inside her most personal memories.”

“We are inviting the audience into her apartment. It is important that they meet Dr. Ruth not as the polished talk-show host or figure they know but to see her as a human being,” says Nachamie, who met Dr. Ruth several times as a child and then directed the show in 2019 at New Repertory Theatre in Massachusetts with actor Anne O’Sullivan at the center. She returns to the role in the Playhouse’s production.

BroadwayWorld wrote in a review of the show at New Repertory Theatre, “A must in any solo stage performance is for the artist to connect with the audience, and Anne O’Sullivan reaches through the fourth wall to grab our attention with warmth and Ruth’s indomitable joie de vivre.”

Dr. Ruth, also known as Karola Ruth Siegel, was born in June 1928 in Frankfurt, Germany. Her parents placed her on a kindertransport in 1939 for her safety, which took her from Nazi-occupied Germany to Switzerland and permanently separated her from her family. She survived war-torn Europe and became an Israeli sniper and Jewish freedom fighter with the Haganah. She later moved to Paris with her first husband to begin her education and then navigated life as a working single mother in New York City, in pursuit of continuing her training in psychology and counseling. Shortly after, her illustrious career as an educational media personality began.

“If you thought you knew all about Dr. Ruth, the woman, the myth, the legend, you might just be mistaken,” TheaterMania writes of the one-woman show.

Audiences can learn the true story behind the legend beginning April 9.

TICKETS
To purchase tickets or for more information, call the Playhouse Box Office at 513-421-3888 (toll-free in Ohio, Kentucky and Indiana at 800-582-3208) or visit www.cincyplay.com. For patrons who are deaf, hard-of-hearing, deaf-blind or speech-disabled, dial 711 to connect to the Box Office via Ohio Relay Services.

Performances on Tuesdays through Saturdays will begin at 7:30 p.m. Saturday and Sunday matinees are at 2 p.m. There is one Wednesday matinee at 1 p.m. on April 20.

Individual tickets start at just $35. Student tickets are just $15 on the day of the show for all other performances. Discounted ticket prices for teens are available for all productions and are $30 to $45, depending on show and seat location. There will be four post-show meet-the-artist discussions during the run. For tickets, visit cincyplay.com.

ADVISORY
Recommended for adult and teenage audiences. This one-woman show about America’s favorite sex therapist appropriately contains discussion of healthy sex and sexuality, while also covering other mature topics. Much like Dr. Ruth, these topics are addressed with a cheerful and disarming tone.

MEET THE ARTISTS Stay after select performances for a behind-the-scenes discussion with the cast and crew:

Face masks covering the nose and mouth must be worn at all times in all areas of the Playhouse. Visit the Health & Safety page for details.

The Playhouse is supported by the generosity of more than 40,000 contributors to the ArtsWave Community Campaign. The Ohio Arts Council helps fund the Playhouse with state tax dollars to encourage economic growth, educational excellence, and cultural enrichment for all Ohioans. The Playhouse also receives funding from the Shubert Foundation.