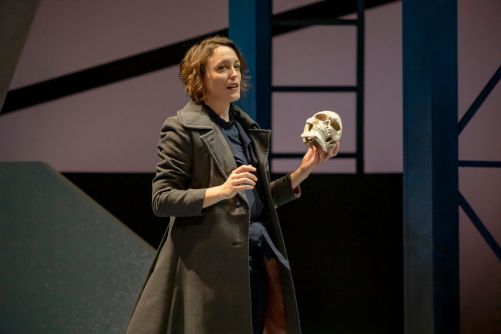 Portraying Hamlet as a female, CSC is finally able to present this production, 3 years in the making, after several pandemic related closures

The mysterious death of a king is followed by his brother’s unconventional ascension to the throne. The Queen’s bed casts young Hamlet, usurped heir to the crown, in the role of reluctant avenger. Incest and intrigue, murder and madness, triumph and treachery all combine to paint one of the most complex and compelling portraits in all of English literature. Cincinnati Shakespeare Company is delighted to present this groundbreaking and contemporary production of Shakespeare’s Hamlet.

Starring as Hamlet is Sara Clark, who has made a home at Cincinnati Shakespeare Company for the past 16 years as an actor, director, teacher, and fundraiser. Also currently serving as Director of Development, Sara manages all philanthropic activities for the organization, raising over $1.5MM annually in support of Shakespeare and the Classics. As a member of the CSC Resident Ensemble, she has racked up over 75 productions with CSC, tackling such roles as Rosalind, Juliet, Marc Antony, Elizabeth Bennet, Lady Macbeth, and now, Hamlet!

In December 2019, Hamlet, Sara Clark took the Tedx Cincinnati Woman’s stage and joined 10 other female speakers and 3 female centered performances for an audience of over 500 at Memorial Hall. There she spoke about the importance of the decision to play the Bard’s most temperamentally capricious and preternaturally intelligent character as a woman and how it can help us imagine a better world. For Ms. Clark’s speech in its entirety, check out the video on YouTube at Hamlet, Thy Name is Woman. | Sara Clark | TEDxCincinnatiWomen.  This is also not the first time that CSC has presented Hamlet with a woman in the infamous role. In 1997, when Cincinnati Shakespeare Company was under the name Cincinnati Shakespeare Festival, one of the company’s Founding Members, Marni Penning, played the title character role, Hamlet.

CSC welcomes collaborators from Brave Berlin back to the stage for this production to complete the Media Design. Brave Berlin are the Founding Creative Directors of Blink and are returning to CSC after their stunning projection and light mapping design for “1984” creating an immersive theatrical experience for “Hamlet.”

Hamlet runs February 25- March 20, 2022 with performances on Thursdays, Fridays, and Saturdays at 7:30 PM and Sundays at 2:00 PM. Tickets are on sale now. There are discounts available for students, seniors, local residents, and community partners as access to all is important to CSC. Each performance night has a limited number of $14 “Access” tickets in the Upper Gallery.  These can be purchased in advance by going online or calling the Box Office.  And starting 1 hour before each performance, any unreserved tickets may be available as a discounted Rush Ticket to anyone, not just students. These tickets are only $12 and could be located anywhere in the house depending on that evening’s availability. These cannot be reserved more than 1 hour before a show and must be purchased in person in the Box Office. Visa, Discover, MasterCard, and American Express are accepted. Ticketing fees apply.  To purchase tickets or for more information, call the CSC Box Office at 513.381.BARD (2273) ext. 1, or go online at www.cincyshakes.com.

At this time, all ticketholders must be masked and show proof of a full COVID vaccination status OR provide a negative COVID test to enter The Otto M. Budig Theater. More details on the exact procedure are shared before each performance.  Learn more at CSC’s Health and Safety page at cincyshakes.com/health-and-safety/. All polices are subject to change.