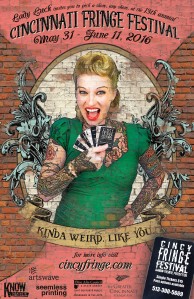 The Picks of the Fringe:

Filed under Cincy Fringe Festival, In Other News

MEASURE FOR MEASURE features Isabella struggling to maintain her bodily autonomy amongst several powerful men who desire her. This exploration of Shakespeare’s text highlights the changes between 17th century Verona and today–and what hasn’t changed

THE SECRETS OF AVONDALE FALLS
The O’Debra Twins
Brooklyn, NY

Avondale Falls. Where everybody knows your name. Because they’re planning to poison you for seducing their fiancé while they were in an amnesia-induced coma after falling into quicksand, and your husband, the world’s handsomest doctor, is trying to put you in a medical prison for the exceptionally beautiful and rich. No one is safe in this 1980s soap opera, performed radio-style. Brought to you by the creator of RADIO STAR and her evil twin sister.

The creators of The King & I: a Hunk of Burnin’ Love (Citybeat Critic’s Pick 2014) are back for their 3rd Cincy Fringe with the story of wannabe lounge singer, Vinnie Velour, who must fight for the right to sing via a series of audience-chosen variety acts offering 27 possible outcomes! “There’s nothing Vinnie can’t do…à la the screwball comedies of the ‘40’s” ~Nuvo Magazine “One of this year’s best. Don’t miss this show!” ~Indyfringetalks.com.

Moth Host and Storyteller Peter Aguero takes the audience through a raw and sympathetic look at his relationship with and without his father. “Simply, perfectly moving” – Edmonton Journal “A master storyteller and wordsmith” – Winnipeg Free Press

Filed under Cincy Fringe Festival, In Other News

Written and performed by Antonia Lassar
Directed by Angela Lassar

Can there be laughter in the healing process? The lives of survivors, perpetrators, and bystanders weave together in a wickedly funny and piercingly insightful one woman show about a community trying to heal after a sexual assault. In POST TRAUMATIC SUPER DELIGHTFUL, the personal is political, the political is personal. And the person is a clown. “Meet your new heroes”- Marie Claire Magazine. 60 minutes.

Cincinnati, OH­ – POST TRAUMATIC SUPER DELIGHTFUL is a one­-woman/ half­-clown/ half­monologue/all-feminist critique of the sexual assault crisis on college campuses. The play weaves the lives of survivors, perpetrators, and bystanders into the story of a community struggling to heal after assault. Through clowning, the show surpasses the victim/villain dichotomy and welcomes an open-­hearted conversation about healing.

“Meet your new heroes… An opportunity for communities to come together to laugh, heal, and  learn.” – Marie Claire Magazine

PLAYING IN THE ART ACADEMY COMMONS FOR FIVE NIGHTS ONLY:

Tickets are $15 and available at cincyfringe.com  Run time: 60min, no intermission

After premiering at the 2015 FRIGID New York Festival to overwhelming audience response, POST TRAUMATIC SUPER DELIGHTFUL has spent the last year touring colleges and festivals around North America. The play and creative team have received national attention, being featured by  Marie Claire Magazine and Autostraddle  and working with Glamour Magazine  to mentor  winners of their Top Ten College Women Competition.

“POST TRAUMATIC SUPER DELIGHTFUL is a play that demands to be heard at schools, crisis centers, and theatres across the country.” – Theater Is Easy

The team of collaborators behind this play came together to shatter the mold survivors are forced to fit into and explore how assault affects an entire community. Rape doesn’t happen in a vacuum. How is everyone hurt by one assault? Is it safe to laugh together? Can laughter create connection? Who is accountable? In Post Traumatic Super Delightful, the personal is political, the political is personal. And the person is a clown.