THREE is an original work presented by CAT. Over the next month our team of talented ensemble members will work together under the direction of Landon Hawkins to create a brand new take on an old story. Our initial discussions regarding this piece have sparked questions about finding the connective threads between the live paraphrasing of Chekhov’s text, horrible puns, and, weirdly, baseball. We’re excited to see where this piece takes us and what we discover! 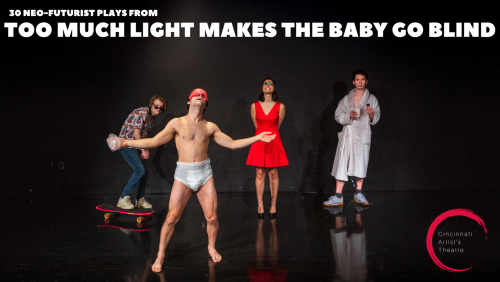 In January, CAT will present three performances of TOO MUCH LIGHT MAKES THE BABY GO BLIND (30 Plays in 60 minutes).

Having opened in 1988 and still playing today as the longest-running show in Chicago history, Too Much Light Makes The Baby Go Blind is an ensemble experiment in presenting “30 Plays in 60 Minutes.” Each two-minute play is performed in random order with an interactive audience. An onstage 60-minute timer keeps everyone honest.

This absurd piece written by Greg Allen and The Neo-Futurists is the first play performed by Cincinnati Artist’s Theatre (CAT). The members of CAT have been working in the Cincinnati artistic community for years, but this will be their first performance as a collective. They’ve teamed with some of the founding members of the Clifton Players to bring you a season of incredible work at The Liberty Exhibition Hall in Northside. Let the madness begin!

Performances are January 18, 20, and 24 at 8pm. Performances take place at the Liberty Exhibition Hall, 3938 Spring Grove Avenue in Northside.

Tickets are $20 for adults, $15 for students/ artists and can be purchased online at
https://toomuchlightcincy.bpt.me/.

TOO MUCH LIGHT MAKES THE BABY GO BLIND Runs Jan. 18-24 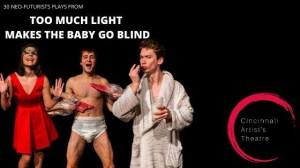 An ensemble experiment presenting 30 plays in 60 minutes. Each short play is performed in random order with an interactive audience. An onstage 60 minute timer keeps everyone honest.