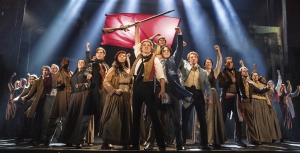 The company of LES MISÉRABLES performs “One Day More.” Photo by Matthew Murphy

Set against the backdrop of 19th-century France, Les Misérables tells an enthralling story of broken dreams and unrequited love, passion, sacrifice and redemption—a timeless testament to the survival of the human spirit. Featuring the thrilling score and beloved songs “I Dreamed A Dream,” “On My Own,” “Stars,” “Bring Him Home,” “One Day More,” and many more, this epic and uplifting story has become one of the most celebrated musicals in theatrical history.

A lively stage adaptation of the Academy Award-winning 1994 Disney film, THE LION KING is the story of a young lion prince living in the flourishing African Pride Lands. Born into the royal family, precocious cub Simba spends his days exploring the sprawling savanna grasslands and idolizing his kingly father, Mufasa, while youthfully shirking the responsibility his position in life requires. When an unthinkable tragedy, orchestrated by Simba’s wicked uncle, Scar, takes his father’s life, Simba flees the Pride Lands, leaving his loss and the life he knew behind. Eventually companioned by two hilarious and unlikely friends, Simba starts anew. But when weight of responsibility and a desperate plea from the now ravaged Pride Lands come to find the adult prince, Simba must take on a formidable enemy, and fulfill his destiny to be king. A vibrant and exciting tale from the great creatives at Disney, The Lion King is a story of love and redemption that nobody should miss.

Tickets on Sale Friday for Four Broadway in Cincinnati Shows

(Cincinnati, OH) ― Ticket go on sale Friday, November 22 for four additional shows in the Fifth Third Bank Broadway in Cincinnati season presented by TriHealth. Ticket prices for all four shows start at $31 and will be available at the Aronoff Center Box Office downtown at 650 Walnut Street, online at CincinnatiArts.org or by phone at 513.621.ARTS starting at 9:00AM.

The world’s most popular musical has audiences leaping to their feet in an acclaimed new production. Set against the backdrop of 19th-century France, LES MISÉRABLES is an unforgettable story of heartbreak, passion, and the resilience of the human spirit, that has become one of the most celebrated musicals in theatrical history. Featuring a timeless score and the beloved songs “I Dreamed A Dream,” “On My Own,” “Bring Him Home,” and “One Day More,” this breathtaking new Broadway production has left both audiences and critics awestruck. LES MISÉRABLES plays the Aronoff Center February 11 – 23, 2020. For complete details and a schedule of performances, please visit BroadwayInCincinnati.com.

Welcome to Margaritaville, where people come to get away from it all—and stay to find something they never expected. With a book by Emmy Award® winner Greg Garcia (“My Name is Earl,” “Raising Hope”) and Emmy Award® nominee Mike O’Malley (“Survivors Remorse,” “Shameless”) ESCAPE TO MARGARITAVILLE is the musical comedy featuring both original songs and your most-loved Jimmy Buffett classics, including “Fins,” “Volcano,” “Cheeseburger in Paradise” and many more. USA Today calls it “A little slice of paradise!” and Entertainment Weekly raves, “It will knock your flip-flops off!” ESCAPE TO MARGARITAVILLE plays the Aronoff Center April 14 – 19, 2020. For complete details and a schedule of performances, please visit BroadwayInCincinnati.com.

Inspired by the beloved films, the romantic and adventure-filled new musical ANASTASIA is on a journey to Cincinnati at last! From the Tony Award®-winning creators of the Broadway classic Ragtime, this dazzling show transports us from the twilight of the Russian Empire to the euphoria of Paris in the 1920s, as a brave young woman sets out to discover the mystery of her past. Pursued by a ruthless Soviet officer determined to silence her, Anya enlists the aid of a dashing conman and a lovable ex-aristocrat. Together, they embark on an epic adventure to help her find home, love, and family. ANASTASIA features a book by celebrated playwright Terrence McNally, a lush new score by Stephen Flaherty (music) and Lynn Ahrens (lyrics) with direction by Tony Award® winner Darko Tresnjak. ANASTASIA plays the Aronoff Center May 12 – 24, 2020. For complete details and a schedule of performances, please visit BroadwayInCincinnati.com.

JESUS CHRIST SUPERSTAR is an iconic musical phenomenon with a world-wide fan base. In celebration of its 50th Anniversary, a new mesmerizing production comes to North America. Originally staged by London’s Regent’s Park Open Air Theatre and helmed by the acclaimed director Timothy Sheader (Crazy for You, Into the Woods) and award winning choreographer Drew McOnie (King Kong, Strictly Ballroom), this production won the 2017 Olivier Award for Best Musical Revival garnering unprecedented reviews and accolades. Appealing to both theater audiences and concert music fans, this production pays tribute to the historic 1971 Billboard Album of the Year while creating a modern, theatrical world that is uniquely fresh and inspiring. JESUS CHRIST SUPERSTAR plays the Aronoff Center June 11 – 16, 2019. For complete details and a schedule of performances, please visit BroadwayInCincinnati.com.

Single tickets for LES MISÉRABLES, ESCAPE TO MARGARITAVILLE, ANASTASIA, and JESUS CHRIST SUPERSTAR will be available at https://www.cincinnatiarts.org/. Performance dates & times for most shows are: Tuesday – Thursday at 7:30PM, Friday at 8:00PM, Saturday at 2:00PM and 8:00PM, Sunday at 1:00PM and 6:30PM. JESUS CHRIST SUPERSTAR will have a 6:00PM performance on Sunday, June 21. For groups of 10 or more, contact the group sales department at 513.369.4363. Performance schedule, prices and cast are subject to change without notice. For more information on additional shows in the Fifth Third Bank Broadway in Cincinnati season presented by TriHealth please visit BroadwayInCincinnati.com.

Broadway Across America (BAA) is part of the John Gore Organization family of companies, which includes Broadway.com, The Broadway Channel, BroadwayBox.com and Group Sales Box Office.  Led by 14-time Tony-winning theater producer John Gore (Owner & CEO), BAA is the foremost presenter of first-class touring productions in North America, operating in 45 markets with over 400,000 subscribers. Presentations include Disney’s The Lion King, Wicked, The Book of Mormon, The Phantom of the Opera and Hamilton. Current and past productions include Ain’t Too Proud, Beautiful, Cats, Chicago, Dear Evan Hansen, Mean Girls, Moulin Rouge! and To Kill A Mockingbird.

MEAN GIRLS presented by Broadway in Cincinnati through Nov. 17. I attended the opening night performance.

Interested in a more immersive experience? You can join cast members from MEAN GIRLS in a Broadway Weekends theater camp for adults.

The stage adaption of the movie MEAN GIRLS arrived Tuesday at the Aronoff Center for a two week stay.

The vocals of the leads are strong across the board and the ladies have some great belting solos. Danielle Wade is easily likable as fish out of water Cady. The titular “Mean Girls” play off of each other well: Mariah Rose Faith as queen bee Regina, Megan Masako Haley as desperate people-pleasing Gretchen, and Jonalyn Saxer as the extremely dim-witted Karen. Mary Kate Morrissey is solid as angst-ridden artist Janis.

It is CCM-alum Eric Huffman though who steals the show as Damian. Serving as co-narrator, he establishes a great rapport with the audience and his enjoyment leading the production numbers is contagious.

The choreography is high-energy and fun to watch with clever use of set pieces and props throughout. The support of talented ensemble is instrumental in setting the scene and keeping the pacing tight.

The LED walls of the set work very well and are used to great effect. They allow the location of the scene to change instantaneously when needed. At times they even trick the eye, making the exits disappear entirely. The brief delay to address a flooring issue for the safety of the cast was handled quickly and professionally.

While the show is very enjoyable, I never connected to the characters emotionally. The consequences of Cady’s actions are few and short lived. Forgiveness from those she wronged is nearly immediately and makes the final scenes of the show seemed rushed. Winner of four Tony Awards including Best Musical Revival, HELLO, DOLLY! is the universally acclaimed smash that NPR calls “the best show of the year!” and the Los Angeles Times says “distills the mood-elevating properties of the American musical at its giddy best.”  Director Jerry Zaks’ “gorgeous” new production (Vogue) is “making people crazy happy!” (The Washington Post). After breaking box office records week after week and receiving unanimous raves on Broadway, this HELLO, DOLLY! is now touring America, paying tribute to the original work of legendary director/choreographer Gower Champion – hailed both then and now as one of the greatest stagings in musical theater history. Rolling Stone calls it “a must-see event. A musical comedy dream. If you’re lucky enough to score a ticket, you’ll be seeing something historic. Wow, wow, wow, indeed!”