Season tickets for the 22/23 Fifth Third Bank Broadway in Cincinnati Season presented by TriHealth will go on sale Wednesday, April 20 online, by phone and in-person at 10:00am. There will be three convenient ways to purchase season tickets:

MONTHLY PAYMENT PLAN
Order by May 20 and make four easy monthly payments.  This offer is only available using a credit card.

SEASON PATRON CLUB
In addition to all the regular season ticket holder benefits, special Patron Club season tickets (available with an annual membership fee of $120) guarantee seating in the front orchestra or first three rows of the loge and include extended benefits such as complimentary drink vouchers and recognition in the PLAYBILL program.

CLOUD CLUB
For theatre lovers on a budget, the “Cloud Club” offers our seven-show package with COMPLETE subscription benefits starting at $233 for all performances.

PERFORMANCE INFORMATION
Broadway in Cincinnati shows typically run for two weeks at the Aronoff Center.  Performance options are Tuesday through Thursday evenings at 7:30pm, Friday evenings at 8:00pm, Saturdays at 2:00 & 8:00pm and Sundays at 1:00 & 6:30pm. (All times are subject to change.) An audio-described performance for the visually impaired and an American Sign Language interpreted performance for the deaf are available.  Anyone requiring either of these services or accommodations for the physically challenged should request so when purchasing season tickets.  Guests interested in learning more about age appropriateness and content of shows can visit BroadwayInCincinnati.com/FamilyGuide.

GROUP SALES AND SINGLE TICKETS
Group sales information is now available for all shows. Reservations for all shows may be made by calling Group Sales Manager Peggy Holthaus Hughes, at 513.369.4363 or email at Peggy.Hughes@BroadwayAcrossAmerica.com. For more information visit BroadwayinCincinnati.com.

Single ticket on-sale dates for individual shows will be announced at a later date.

An uplifting comeback story like no other, TINA – The Tina Turner Musical is the inspiring journey of a woman who broke barriers and became the Queen of Rock n’ Roll. One of the world’s best-selling artists of all time, Tina Turner has won 12 Grammy Awards and her live shows have been seen by millions, with more concert tickets sold than any other solo performer in music history. Featuring her much loved songs, TINA – The Tina Turner Musical is written by Pulitzer Prize-winning playwright Katori Hall and directed by the internationally acclaimed Phyllida Lloyd.

Celebrating its 50th Anniversary, a new, mesmerizing production of the iconic musical phenomenon returns to the stage. Originally staged by London’s Regent’s Park Open Air Theatre and helmed by the acclaimed director Timothy Sheader (Crazy for You, Into the Woods) and cutting-edge choreographer Drew McOnie (King Kong, Strictly Ballroom), this production won the 2017 Olivier Award for Best Musical Revival garnering unprecedented reviews and accolades. Appealing to both theater audiences and concert music fans, this production pays tribute to the historic 1971 Billboard Album of the Year while creating a modern, theatrical world that is uniquely fresh and inspiring.

With lyrics and music by Emmy, Grammy, Oscar and Tony winners Tim Rice and Andrew Lloyd Webber, JESUS CHRIST SUPERSTAR is set against the backdrop of an extraordinary series of events during the final weeks in the life of Jesus Christ as seen through the eyes of Judas. Reflecting the rock roots that defined a generation, the legendary score includes ‘I Don’t Know How to Love Him’, ‘Gethsemane’ and ‘Superstar.’ 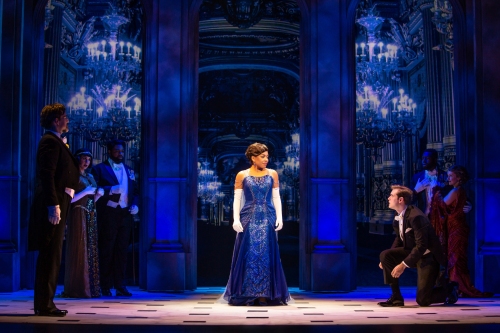 Kyla Stone as Anya & Sam McLellan as Dmitry in the North American Tour of ANASTASIA. Photo by Jeremy Daniel

Inspired by the beloved films, the romantic and adventure-filled new musical ANASTASIA is on a journey to Cincinnati at last! From the Tony Award®-winning creators of the Broadway classic Ragtime, this dazzling show transports us from the twilight of the Russian Empire to the euphoria of Paris in the 1920s, as a brave young woman sets out to discover the mystery of her past. Pursued by a ruthless Soviet officer determined to silence her, Anya enlists the aid of a dashing conman and a lovable ex-aristocrat. Together, they embark on an epic adventure to help her find home, love, and family.

Holding onto hope when times are tough can take an awful lot of determination, and sometimes, an awful lot of determination comes in a surprisingly small package. Little Orphan Annie has reminded generations of theatergoers that sunshine is always right around the corner, and now the best-loved musical of all time is set to return in a new production–just as you remember it and just when we need it most.

ANNIE, directed by Jenn Thompson, features the iconic book and score, written by Tony Award®-winners Thomas Meehan, Charles Strouse and Martin Charnin. This celebration of family, optimism and the American spirit remains the ultimate cure for all the hard knocks life throws your way.

Lukas James Miller as Max Van Horn and Ashley Alexandra as Julie Nichols in the National Tour of TOOTSIE. Photo by Evan Zimmerman for MurphyMade.

Call it “musical comedy heaven” (Rolling Stone). Call it “the most uproarious new musical in years!” (The Hollywood Reporter). Call it TOOTSIE! This laugh-out-loud love letter to the theater tells the story of Michael Dorsey, a talented but difficult actor who struggles to find work until one show-stopping act of desperation lands him the role of a lifetime. Featuring a hilarious Tony®-winning book by Robert Horn and an outrageously clever score by 2018 Tony-winner David Yazbek (The Band’s Visit, Dirty Rotten Scoundrels), this New York Times Critic’s Pick is “a joyful delight” (The Washington Post) that’s “so packed with punchlines, it should be called a jokebox musical!” (Bloomberg). “In these turbulent times, when the world seems out of balance, we need a place to let the good times roll,” raves Rolling Stone. “TOOTSIE is it!”

SOME SHOWS YOU SEE. THIS SHOW YOU FEEL.
Joy, love, heartache, strength, wisdom, catharsis, LIFE—everything we’ve been waiting to see in a Broadway show—is here in the exhilarating, fearless new musical based on Alanis Morissette’s world-changing music.

Directed by Tony Award winner Diane Paulus (Waitress, Pippin, upcoming 1776) with a Tony-winning book by Diablo Cody (Juno) and Grammy-winning score, this electrifying production about a perfectly imperfect American family “vaults the audience to its collective feet” (The Guardian). “Redemptive, rousing and real, JAGGED LITTLE PILL stands alongside the original musicals that have sustained the best hopes of Broadway.” (The New York Times)

You live, you learn, you remember what it’s like to feel truly human… at JAGGED LITTLE PILL. 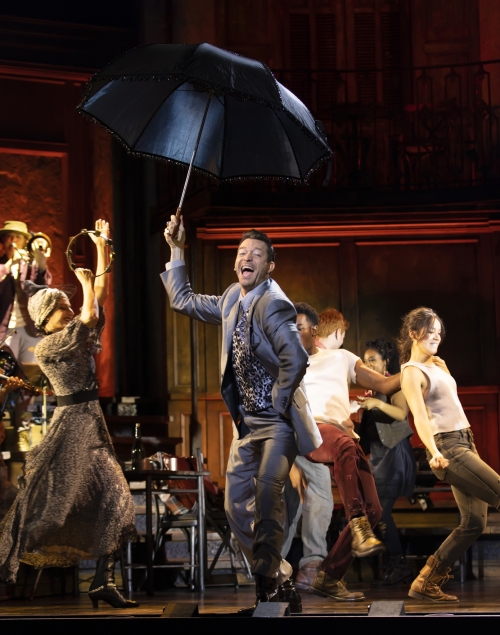 COME SEE HOW THE WORLD COULD BE.

Welcome to HADESTOWN, where a song can change your fate. Winner of eight 2019 Tony Awards® including Best Musical and the 2020 Grammy® Award for Best Musical Theater Album, this acclaimed new show from celebrated singer-songwriter Anaïs Mitchell and innovative director Rachel Chavkin (Natasha, Pierre & The Great Comet of 1812) is a love story for today… and always.

HADESTOWN intertwines two mythic tales — that of young dreamers Orpheus and Eurydice, and that of King Hades and his wife Persephone — as it invites you on a hell-raising journey to the underworld and back. Mitchell’s beguiling melodies and Chavkin’s poetic imagination pit industry against nature, doubt against faith, and fear against love. Performed by a vibrant ensemble of actors, dancers and singers, HADESTOWN is a haunting and hopeful theatrical experience that grabs you and never lets go. 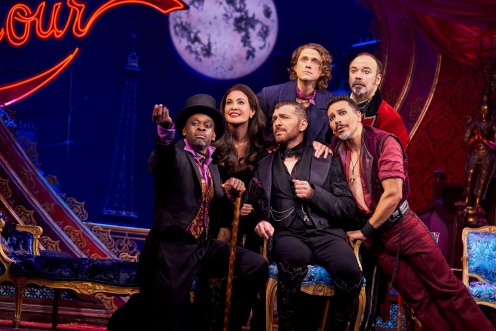 Broadway Across America (BAA) is part of the John Gore Organization family of companies, which includes Broadway.com, The Broadway Channel, BroadwayBox.com and Group Sales Box Office.  Led by 14-time Tony-winning theater producer John Gore (Owner & CEO), BAA is the foremost presenter of first-class touring productions in North America, operating in 48 markets with over 400,000 subscribers. Presentations include Disney’s The Lion King, Wicked, The Book of Mormon, The Phantom of the Opera and Hamilton. Current and past productions include Ain’t Too Proud, Beautiful, Cats, Chicago, Dear Evan Hansen, Mean Girls, Moulin Rouge! and To Kill A Mockingbird.

The John Gore Organization is the leading developer, producer, distributor and marketer of Broadway theatre worldwide. Under the leadership of 14-time Tony-winning theater producer and owner John Gore, its family of companies includes Broadway Across America, Broadway.com, The Broadway Channel, BroadwayBox.com, and Group Sales Box Office. The company presents shows in 48 cities across North America as well as on Broadway, Off-Broadway, London’s West End, Japan, and China. It has won Tony Awards in every producing category as well as numerous other Drama League, Drama Desk and Olivier award