HARPERS FERRY 2019 at the Know Theatre 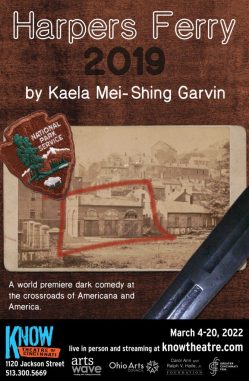 “I can’t join any crusades right now, I just can’t!”

What happens when history threatens to repeat itself?

When three young park rangers clash over a work assignment, sparks of romance and revolution fly up in Harpers Ferry 2019, running March 4 – 20 at Know Theatre of Cincinnati.

In sleepy West Virginia, a love triangle of National Park rangers train for a living history reenactment about John Brown’s ill-fated raid on Harpers Ferry one hundred sixty years after the event while a reality tv documentary crew looks on. When race and politics enter the equation, the realities of American life collide explosively with the narratives of our history.

This production is presented simultaneously live onstage and livestreaming. Livestreamed performances are Wednesday through Saturday, at 8 PM. The base ticket price for livestreaming is $10; we also offer a $20 livestream ticket option for audiences who would like to support our Living Wage initiative.

The Know’s third show back on our Jackson Street MainStage after we were shuttered by the pandemic, Harpers Ferry 2019 is a world premiere. This dark comedy by Kaela Mei-Shing Garvin had a workshop reading at The Alliance in Atlanta and will be fully staged for the first time for Cincinnati audiences.

Abolitionist John Brown’s 1859 raid on Harpers Ferry, on the banks of the Potomac and Shenandoah Rivers, was a flashpoint leading up to the Civil War. Brown’s attempt to seize the U.S. Armory at Harpers Ferry did not, as he hoped, incite an uprising among the enslaved people in America, and Brown was convicted and hanged for treason, but Harpers Ferry has become a national historic park serving as a monument for the struggle for freedom and civil rights.

Now, on the 75th anniversary of that park and the 160th anniversary of Brown’s ill-fated raid, three young park rangers prepare for a celebration and re-enactment, under the watchful eyes of a reality TV crew, documenting it all. But this isn’t “Real World: Harpers Ferry,”  and the sparks of interpersonal drama have the potential to light a metaphorical powder keg.

Tamara Winters, the Associate Artistic Director of the Know and director of Harpers Ferry 2019, shared her excitement for this world premiere:

“Playwright Kaela Mei-Shing Garvin is asking tough questions about whose perspective gets canonized when history gets recorded, and how the lens through which you view your history can wildly distort your view.

Is this a story a dark comedy about three young park rangers whose personal lives get increasingly tangled, a story about a reality tv crew trying to capture the drama of a complicated workplace, or an evisceration of our complicity in how we perpetuate cycles of violence?

The answer is YES to all three… plus it’s funny as hell.”

Ryan-Chavez Richmond plays Jay, the ambitious park ranger who’s tasked with directing a living-history reenactment of John Brown’s raid. Veronica Dang* plays Celia, whose bright and polished demeanor hides a host of secrets. Samuel Fisher appears as wannabe-revolutionary Paul, who struggles to set aside his past with Celia even as he dreams of a bright future. The Know is pleased to welcome all three of these actors to their Know Theatre MainStage debuts.

Tickets are available on our website, knowtheatre.com, or by calling our box office at 513-300-5669.

AT A GLANCE
Production: Harpers Ferry 2019 by Kaela Mei-Shing Garvin

Tickets: The standard ticket price is $25. Audiences may opt to support the Know’s initiative to pay all artists and employees a living wage by selecting the $35 Living Wage Ticket. Low-cost admission available for $15. On Wednesdays, as part of our Welcome Experiment, tickets are $5 in advance or FREE beginning one hour prior to the show. The Welcome Experiment is bright to you this season by Judge Mark P. Painter (Ret).

Know Theatre is Cincinnati’s Theatrical Playground. The Know showcases unexpected voices, new works, and plays that embrace the inherent theatricality of the live experience. Know Theatre seeks to be a place where artists and audiences feel welcome to take artistic risks, creating work that is cutting edge and accessible.

Know Theatre’s work is made possible, in part, by the generosity of community contributions to the ArtsWave Campaign.

Know Theatre is also supported by The Carol Ann & Ralph V. Haile, Jr. Foundation, helping to change our communities for the better through collaboration and innovation, and the Greater Cincinnati Foundation, which provides a simple, powerful, and highly personal approach to giving.

Know Theatre is a member of Theatre Communications Group and an Associate Member of the National New Play Network.