18 months after their mainstage went dark, Cincinnati Shakespeare is thrilled to be announcing their re-opening!

CINCINNATI (August 12, 2021) – Today, Cincinnati Shakespeare Company (CSC) announced the titles for the 2021-2022 Grand Re-Opening Season at The Otto M. Budig Theater. This season features Shakespeare greats, classic comedies, fresh adaptations, American masters, and more. These productions, beginning in October 2021, will be the first on the Mainstage at CSC since the pandemic closure in March 2020. CSC’s Producing Artistic Director, Brian Isaac Phillips said, “While the past 18 months were not what anyone at Cincinnati Shakespeare Company originally envisioned, it is certainly one we will never forget. As we moved through it with imagination, flexibility, tenacity, and endurance, we were sustained by the hope that live theatre would eventually return. We are elated to share that news today!” 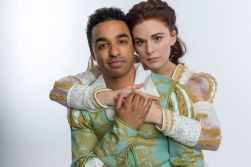 The season will begin in October with William Shakespeare’s ROMEO AND JULIET directed by Darnell Pierre Benjamin.  This production will be set in traditional Elizabethan staging and will make for a triumphant return to the Mainstage. The star-crossed lovers in “Romeo and Juliet” will be Courtney Lucien and Crystian Wiltshire.  Both actors frequently appear at CSC with Courtney last appearing in “Pride and Prejudice,” and Crystian Wiltshire appearing last in “The Merry Wives of Windsor” and “All the Way.”  Crystian has also recently joined Cincinnati Shakespeare as its new Associate Artistic Director.

Following “Romeo and Juliet,” for the 15th time this Christmas season, EVERY CHRISTMAS STORY EVER TOLD (AND THEN SOME!) by Michael Carleton, James FitzGerald, and John K. Alvarez will continue to delight audiences with its brand of irreverent pop culture holiday humor.  This production will have many more dates added, opening in mid-November to meet the pent up demand for this beloved holiday classic!

In the spring, the season continues with American master August Wilson and his play MA RAINEY’S BLACK BOTTOM, with a powerhouse music filled production directed by Candice Handy, CSC’s newly appointed Director of Education.  This production will feature Torie Wiggins as Ma Rainey. The first production to be completely halted due to the pandemic before it could even begin was the much-awaited production of William Shakespeare’s HAMLET featuring Sara Clark portraying a reverse gendered Hamlet.  “This is an important one to us and we are thrilled to present this production…finally!” said Brian. “Hamlet” will also feature a collaboration with Brave Berlin, the media creatives known for their work with BLINK and who brought their stunning light projection design to CSC’s production of “1984” in 2018.

That will be followed by the slapstick production of William Shakespeare’s THE COMEDY OF ERRORS inspired by an old Las Vegas world, featuring Geoffrey Warren Barnes II and Justin McCombs and directed by Jeremy Dubin.

And then to close the season, CSC will reprise the production that was stopped only weeks into performance last March: Kate Hamill’s adaptation of Jane Austen’s PRIDE AND PREJUDICE.  “This show had already become the most popular production in Cincinnati Shakespeare Company history before the Governor’s order on mass gatherings was made on March 12, 2020. We think it will be very fitting for us to close this triumphant season with the return of this much loved and very jubilant production,” said Mr. Phillips.

“As we head into what will inevitably be the most unique and innovative season in CSC history, we will keep finding ways to bring Shakespeare and the Classics to life for all, and will re-open as a better, stronger, and more inclusive organization. If the past year has taught us anything, it is that CSC is more than just a theater. CSC is a community of artists and collaborators. We believe in in the power of live performance, the resonance of spoken words, the magic of storytelling, and the profound impact an artistic experience can have on an individual,” said Mr. Phillips.

Cincinnati Shakespeare Company continues to offer audiences great value with affordable, flexible subscriptions that include flexible tickets that can be used in any combination for any performance. Subscription packages start at $240.  All subscriptions and single tickets are currently on sale now and may be purchased through the Cincinnati Shakespeare Company website www.cincyshakes.com or box office by calling 513-381-BARD (2273) ext. 1.

There are also discounts available for students, seniors, local residents, and community partners as access to all is important to CSC. Each performance night has a limited number of $14 “Access” tickets in the Upper Gallery.  These can be purchased in advance by going online or calling the Box Office.  And starting 1 hour before each performance, any unreserved tickets may be available as a discounted Rush Ticket to anyone, not just students. These tickets are only $12 and could be located anywhere in the house depending on that evening’s availability. These cannot be reserved more than 1 hour before a show and must be purchased in person in the Box Office.

We are thrilled to be re-opening the Mainstage season with Romeo and Juliet!  William Shakespeare’s timeless tale of two star-crossed lovers and the feuding families who tear them apart, returns to the Cincinnati Shakespeare Company stage in all of its everlasting grandeur. Revel in lavish masked balls, rousing street brawls, tragic young love, and some of the most exquisite poetry ever penned, all in a traditional Elizabethan setting. Fall in love again for the first time.

Every Christmas Story Ever Told (and Then Some!)*
by Michael Carleton, James FitzGerald, and John K. Alvarez
November 19 – December 26, 2021

CSC’s holiday smash hit Every Christmas Story Ever Told (And Then Some!) is back again for another season of holiday hilarity! What begins as another annual production of A Christmas Carol, soon devolves into a slightly irreverent look at all of our favorite “Beloved Holiday Classics” including pop culture favorites like It’s a Wonderful Life, Rudolph, Charlie Brown and more! Add in topical references that always keep this annual tradition fresh and fun as we send up everything from Dickens to Dr. Seuss for 90+ minutes of high octane jollity and frivolity.

Tensions and temperatures rise at a Chicago music studio in 1927 when fiery, fearless blues singer Ma Rainey joins her band for a fraught recording session. She is a Black woman determined to control her art and her life on her own terms. However, as egos and generational ideologies clash, heated conflicts erupt between everyone present that wrestle with the complexities of racism and artistic exploitation in this Tony Award® nominated powerhouse of a play.

Hamlet, thy name is Woman. The mysterious death of a king is followed by his brother’s unconventional ascension to the throne and the Queen’s bed casts young Hamlet, usurped heir to the crown, in the role of reluctant avenger. Incest and intrigue, murder and madness, triumph and treachery all combine to paint one of the most complex and compelling portraits in all of English literature. Featuring Sara Clark as the titular role of Hamlet like you’ve never seen her before.

What do you get when you mix love triangles, a jealous wife, a vindictive mistress, a deranged doctor, and not one, but TWO sets of identical twins separated at birth? Well, it can only be The Comedy of Errors. Shakespeare’s silliest, screwiest, and slapstickiest comedy returns to the CSC stage, this time with a Sin City twist. Inspired by golden era Las Vegas, this music filled production will be packed with cool cats, rat packs, showgirls, wise guys, and more!  So place your bets, roll the dice, and check it out, but remember- what happeneth in the theater, stayeth in the theater.

One of the single most cherished stories of all time returns to the CSC stage in a fresh and funky new adaptation which critics are calling “delightfully different,” “fizzy and festive,” and “unlike any adaptation of Jane Austen one has seen before.” Sweepingly romantic, with a good dose of the tongue-in-cheek, Pride and Prejudice follows the love stories of the Bennet sisters, as they find that the path to true love can lead to the most unexpected of places.