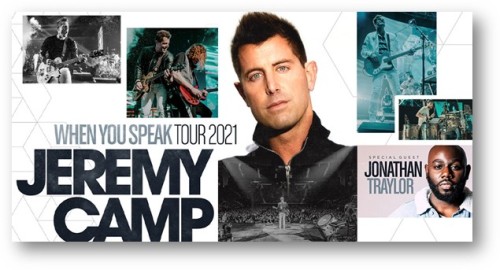 [Nashville, Tenn.] – GRAMMY®-nominated singer/songwriter Jeremy Camp announces the first half of his When You Speak Tour Fall 2021 tour dates with special guest Jonathan Traylor. The tour will make a Cincinnati stop on Sunday, September 26, 2021 at 7:00 PM at the Aronoff Center’s Procter & Gamble Hall.

Tickets are on sale now at www.CincinnatiArts.org and  (513) 621-ARTS [2787]. Due to the pandemic, the Aronoff Center Ticket Office is closed for in-person sales until further notice.

With 41 No. 1 singles over his storied career, Jeremy Camp returns to the stage after a unique year filled with rest after the filming and release of the hit film I Still Believe, featuring KJ Apa, Britt Robertson, Shania Twain, and Gary Sinise.

The When You Speak Tour marks the beginning of a new, exciting season for Camp. The 30-city tour will kick off on September 23 in Detroit and stop in Cincinnati, Chicago, Oklahoma City, Memphis, San Diego and many other cities before the final show. The second half of the tour dates will be announced at a later date.

“There is nothing like being able to tour again,” says Jeremy Camp. “I’m so pumped to share my new music with the fans, as well as play the fan favorites. We are very expectant that the Holy Spirit will move powerfully each night.”

Motown Gospel/Capitol CMG Artist Jonathan Traylor is set to open for Camp each night on the tour. Traylor’s debut album, Unknown, was released in 2020 and is a combination of Christian, Worship, and Gospel influences.

Camp’s newest single, “When You Speak,” debuted last month and gives fans an insight to the new album, which is set to release in the fall ahead of the tour.

For a full list of tour stops and all other tour information, visit jeremycamp.com.

ABOUT JEREMY CAMP
Throughout his 18-year career, Capitol CMG artist Jeremy Camp has established himself with landmark accolades including: