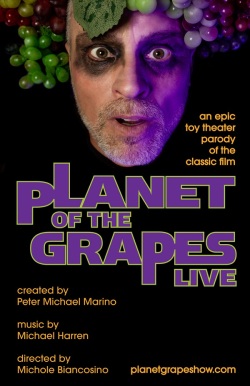 In PLANET OF THE GRAPES LIVE, an astronaut crew crash-lands on an unfamiliar planet in the distant future and are enslaved by a society where grapes have evolved into speaking creatures with human-like intelligence. The original “Planet of the Apes” is credited as one of the most groundbreaking science fiction films of all time. The film’s themes of science vs. religion, biased class systems, and mankind’s self-perceived entitlement to everything on Earth strongly resonated with Marino who peppers the script with excavated passages from co-screenwriter Rod Serling’s original screenplays.

What is Toy Theater? The early 18th century ushered in Europe’s Toy Theater movement, where adults and children assembled mass-produced paper replicas of over 300 popular plays that included the script, stage, scenery, and characters. These DIY kits were sold at the concession stands of opera houses, playhouses, and vaudeville theaters to be performed for family members and guests. Toy Theater literally brought theater into homes.

Since the pandemic began in March 2020, Marino has presented over 100 performances of his interactive, digital live shows “Show Up, Kids!” and “Desperately Seeking the Exit” which were nominated for “Best Zoom Show Performed in Real Time” (BroadwayWorld), and “Outstanding Achievement In An Individual Performance” (No Proscenium). Marino was named “2021 Creative of the Year” by the Young-Howze Theatre Awards.

WHAT: PLANET OF THE GRAPES LIVE
WHO: Created by Peter Michael Marino
Directed by Michole Biancosino
Music by Michael Harren

WHERE: Television, computer, or tablet

BIOS
Peter Michael Marino (Creator) is a NYC-based teacher, writer, performer, and producer. He’s one of the first artists in the USA to present live, online, interactive content during the pandemic and was named “Creative of the Year” by the Younge-Howze Theater Awards. He created the role of bad guy Joules Volter in the award winning, Off-Broadway family show, “Pip’s Island.” Pete’s comedy “Show Up, Kids!” received rave reviews globally, and continues to play live online. His internationally acclaimed solo comedy “Desperately Seeking the Exit” chronicled the unmaking of his West End musical flop “Desperately Seeking Susan.” www.petermmarino.com

Michole Biancosino (Director) has had her work seen on stages across the country and abroad.  Recent projects include “Same But Different” (Christal Brown Dance), two seasons at Edinburgh Fringe of the sold out hit show “Trump Lear,” Peter Michael Marino’s “Show Up!” and “Show Up, Kids!,” and Lia Romeo’s “Connected.” Check out her recent digital theatre work at: https://www.youtube.com/user/ProjectYNYC