Many of us have been in the position of the promising young actor. And at that time, we more than probably had our own opinions about the actor who had been around the block more than once. But aging in the theatre changes one’s perspective, doesn’t it? As director and former New Edgecliff Theatre Artistic Director Elizabeth Harris shares: “I relate to everything in this script. As a theatre artist and as a human being it’s hard not to.”

David Mamet’s A Life In Theatre, which serves as the finale of NET’s 20th season, explores many issues we find mirrored from the world of performance to our everyday lives. Although dealing with very real challenges in theatre, the entire shows serves as a metaphor for lessons we can all learn, stage artist or not. Perhaps it is because this is referred to as one of Mamet’s “gentlest” plays (and if you know Mamet, you’ll know this to be almost indisputable), but Harris feels this show’s message is timeless. “This play is absolutely still relevant,” Harris states. “Some critics have said that the types of plays performed by the characters…are not the types of pieces you see on the contemporary stage…however the message, the theme, and experiences of these characters as they live a life in the theatre are still true today.”

A Life In Theatre lets us into the world of the changing relationship between John and Robert, two actors working together in a repertory company. John is our novice: hanging on Robert’s every word as he acknowledges he has a lot to learn. In turn, Robert, our veteran actor, feels he has a great deal to teach the younger lad as they work together in a series of shows. As time goes on, however, the chemistry between them changes. “The heart of the message of A Life in the Theatre is that theatre is life,” Harris reminds us. “We as theatre artists are speaking the language of the human condition. We celebrate life every time we have the privilege to walk the boards. It is a service, a[n] honor, a passion.”

New Edgecliff’s production of A Life In Theatre features the acting talent of Michael Shooner and Aaron Epstein. Shooner, who founded NET and served as Executive Director for its first 17 years, is a busy man around town. He is a long-standing member of Actors’ Equity and has been seen performing with other notable theatres in the area including Cincinnati Shakespeare Company, Clifton Players, and Cincinnati Playhouse in the Park. With his beloved NET, he was seen in Mamet’s American Buffalo (also directed by Harris) and in the regional premiere of St. Nicholas, a show Ensemble Theatre Cincinnati has announced it will be taking on during their 2018-2019 season.

Epstein is no slouch, either: he is a past student of Harris’ from the Certificate Acting Program at CCM Preparatory Department and played Caliban in the Thomas More Shakespeare in the Park’s production of The Tempest last summer. He has also been seen in an area production of All My Sons and NET’s own Soldier’s Christmas. 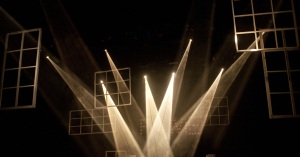 Prize-winning author David Mamet, takes us into the lives of two actors: John, young and rising into the first flush of his success; the other Robert, older, anxious, and beginning to wane. In a series of short, spare, and increasingly raw exchanges, we see the estrangement of youth from age and the wider, inevitable and endless cycle of life, in and out of the theatre.

New Edgecliff Theatre has announced the cast for A LIFE IN THE THEATRE.

Cast (in order of appearance): Brandon Burton as Thomas Novachek and Tess Talbot as Vanda Jordan

Thomas, a beleaguered playwright/director, is desperate to find an actress to play the female lead in his adaptation of the classic tale, Venus in Fur. Into his empty audition room walks a vulgar and equally desperate actress who is utterly wrong for the sophisticated part. However, as the two work through the script, they blur the line between play and reality, entering into an increasingly serious game that only one of them can win. For mature audiences.

All shows begin promptly at 7:30pm.

NET has the distinct pleasure of performing in the spacious second-floor hall at Hoffner Lodge, located at 4120 Hamilton Avenue and set in the heart of one of Cincinnati’s coolest and most vibrant neighborhoods: Northside. Free parking is conveniently located across the street at the Northside Bank and Trust. Street parking may also be available and is free after 6pm.

Be sure to visit our website at www.newedgecliff.com for even more information about current and future events, directions to our space, sponsorship opportunities, and more! We can also be found on Facebook, Twitter, and Instagram (@newedgecliff for all three). Stay on the edge with us!

David Ives’ VENUS IN FUR brings a whole new meaning to “getting” the role.  Thomas, a beleaguered playwright/director, is desperate to find an actress to play Vanda, the female lead in his adaptation of the classic sadomasochistic tale Venus in Fur. Into his empty audition room walks a vulgar and equally desperate actress—oddly enough, named Vanda. Though utterly wrong for the sophisticated part, Vanda exhibits a strange command of the material, piquing Thomas’ interest with her seductive talents and secretive manner. As the two work through the script, they blur the line between play and reality, entering into an increasingly serious game of submission and domination that only one of them can win. A mysterious, funny, erotic drama that represents yet another departure for the multifaceted David Ives.