MAKE A F*CKIN’ SHOW, YOU P.O.S. at Cincy Fringe 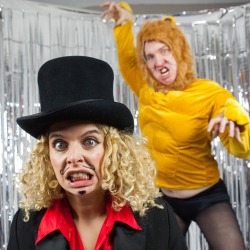 Performer/creator/clown/snake oil salesmen duo, Bradley Kristian Wrenn and Sarah Knittel, are taking over the Cincinnati Fringe Festival with “MAKE A F*CKIN’ SHOW, YOU P.O.S.” Coming to the city from parts unknown (Philadelphia), MAFSYPOS is a mad experiment springing from the darkness of plague times. Birthed from the vital need to spill the duo’s messy process onto the stage and return to live performance as quickly as possible.

Brad and Sarah are long-time collaborators and Fringe Festival royalty with heaps of theatrical accolades and 45 years of improv experience between them. In less than 55 minutes, they will create a live-directed masterpiece from scratch in front of the audience. Will it be an earth shattering opus? A disastrous failure?

About the Artist
Bradley Wrenn – a theater artist dedicated to “joyful play and absurd whimsy”. He is co-artistic director of The Berserker Residents, a company dedicated to original comedic productions that spring from improvisation and curiosity. His work has been hailed as “daft, ephemeral and joyous” by the Scotsman and he has been praised for his “refusal to relinquish that unrefined creative spirit” by the New York Times. The Berserker Residents’ shows include: The Jersey Devil, The Giant Squid, The Annihilation Point (NYTimes Critics Pick), The Lapsburgh Layover (commissioned by Ars Nova, NYTimes Critics Pick
and Village Voice Critic Pick), The Very Merry Xmas Carol Holiday Adventure Show (commissioned by Theater Horizon and published by PlayScripts), It’s So Learning (Presented by FringeArts and ASU Gammage), The Post Show (Presented at The Assembly in Edinburgh, Scotland) and Broccoli, Roosevelt and Mr House (commissioned by FringeArts). His work has been presented nationally and internationally at the Abraham’s Art Center, The San Francisco Mime Troupe, The Annenberg Center, The Assembly in Scotland and ASU Gammage. He has been artist in residence with FringeArts, Drew University, Ars Nova (company in residence) and the University of the Arts. He has also worked as a deviser, writer and producer with Swim Pony Performing Arts, Pig Iron Theater Company and director Nell Bang-Jensen.

Sarah Knittel – A Philadelphia based theater artist, festival co-founder, and clown. She helped found Free Fringe Philly festival, which creates accessibility to Fringe work in Philadelphia by eliminating costs and ticket prices while supporting the artists. Free Fringe Philly won a coveted arts spot on the Best Of 2021 list from Philly Magazine. Sarah on a stage has been described as “totally engaging” and “the work of a pro, fearlessly engaging the audience from start to finish, until we are all practically co-stars, or at least co-conspirators.” (Broad St Review) Hailed “Philly Actors Who Are Better Than You (at acting)…” (Phindie) The creator of Ben Franklin Sex Party and NIGHTMARE FUEL, a brutal clown show, which won the “Spirit of the Fringe” award in 2019 at Cincinnati fringe. It was also one of the recipients of 1812’s Jilline Ringle Fund. It garnered four stars in Edinburgh Fringe and was lauded as “a quintessential niche fringe experience” by the Wee Review. Sarah has also worked as a deviser and writer with Pig Iron Theater Company, Automatic Arts (inaugural artist in residence), Eva Steinmetz, Johnny Showcase and the Kimmel Center of the Arts.