March 25, 2020, CINCINNATI:    In response to COVID-19 and school closures, The Children’s Theatre of Cincinnati is proud to launch TCT EVERYWHERE — an online resource for parents, teachers and students.

Now that the state of Ohio has officially mandated citizens to stay-at-home, it is very difficult for patrons to come to us. But that doesn’t mean we can’t come to you…virtually!  Check out our frequently updated TCT EVERYWHERE page on our website, where you’ll find crafts, acting and vocal exercises, contests, study guides, podcasts, videos of shows, and more, including: 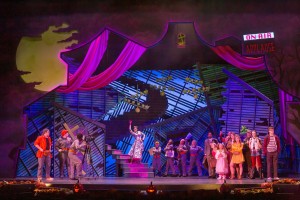 TCT’s production of CASPER THE FRIENDLY MUSICAL at the Taft Theatre, October 2019. Photo by Mikki Schaffner:

Take a virtual field trip and enjoy the show which appeared on the Taft Theatre stage in October 2019.  This new musical adaptation created for families of all ages, CASPER THE FRIENDLY MUSICAL delights, entertains and teaches everyone how to uncover the greatest treasure of all. The show was directed by Roderick Justice and choreographed by Eric Byrd.

Vaporized 50 years earlier during a freak lightning storm, Casper and his three uncles are living a rather uneventful life in the family mansion, until Magdalena Monteverde, their former housekeeper, appears late one night. She seeks the deed to the house…not because she wants to live there, but because she believes the deed contains a secret message that will lead to great fortune. During a frantic race to find the deed between the mansion’s ghostly inhabitants and those determined to kick them out, young Casper, his unforgettable uncles and his new friends learn important lessons about family, fearlessness, and the greatest discovery of them all – friendship.

A huge thank you to IATSE Local 5, The PPS Group, writers Stephen Cole and Matthew Martin Ward and Universal Theatrical Group with NBCUniversal for making this online streaming option possible.

In 2020, the nation celebrates the Centennial Anniversary of Women’s Suffrage in the United States – the 100th anniversary of women winning the right to vote. Viewers can experience the empowering history of the brave women who made triumphant strides through sacrifice and determination. Through story and song, children and adults can learn about the great gift these women left us – an empowering heritage of pride, momentum and purpose. From 1920 to today, these women are a constant source of strength and inspiration.

The production was written and directed by local playwright, Mary Tensing, with music by Tracy Walker—who has been at the forefront of Cincinnati’s independent music scene and whose style sits at the crossroads of Folk, Rock, Country, Jazz, and Blues.

Online Study Guides for MainStage and TCT On Tour shows and the links to TCT’s show-focused podcast, Audio Footlights are also available via the TCT EVERYWHERE webpage.

Vocal Warmup Lesson with Miss Natalie: Easy exercises to do at home – no piano needed!

Missed celebrating St. Paddy’s Day? You can still make this fun leprechaun craft from household supplies! Angelo teaches you how in this fun video.

Stay tuned for additional content to be posted in the coming days and weeks. 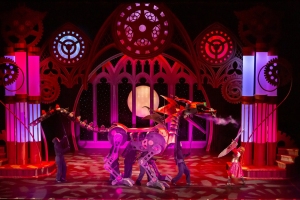 SLEEPING BEAUTY
Coming soon!  A clever take on the classic fairy tale, this new rock musical comedy, which TCT premiered on the Taft Theatre stage in April 2019, is packed with humor, heart and a powerful message! This inspiring production will also be available to watch free of charge for a limited time online.

The impulsive but courageous Princess Aurora (who prefers “Rory”) doesn’t quite fit in with the other princesses in ‘Princess School.’  After meeting her prince by kissing a frog (because how else do you meet guys in Princess School) Rory sets out on her own to discover all the Kingdom has to offer. Along the way, she encounters her evil Fairy Godmother, the Magnificent Magnilda, who placed a curse on Rory when she was a child, causing her to fall into a deep sleep. This sleeping beauty will awaken only with a kiss from her prince. Once she is fully awake and ready to rock, the feisty Princess Rory begins a whirlwind quest to save her Princess Schoolmates: Snow White, The Little Mermaid, Cinderella, the Snow Queen and Rapunzel, and defeat Magnilda.

Story and book by Ken Jones, music by Jamey Strawn and lyrics by Christine Jones.  The show was directed by Ken Jones and choreographed by Eric Byrd.  Kevin Frisch and the Frisch Marionette Company designed the show’s 20-foot dragon – which you might have seen in Cincinnati’s BLINK Parade last fall.

A huge thank you to IATSE Local 5, The PPS Group, and writers Ken Jones, Jamey Strawn and Christine Jones for making this online streaming option possible.

TCT’s production of CASPER THE FRIENDLY MUSICAL at the Taft Theatre, October 2019.

TCT’s production of SLEEPING BEAUTY at the Taft Theatre, April 2019.

The official link is:  https://thechildrenstheatre.com/2020/03/tct-everywhere/

Tagged as COVID-19, The Children's Theatre of Cincinnati