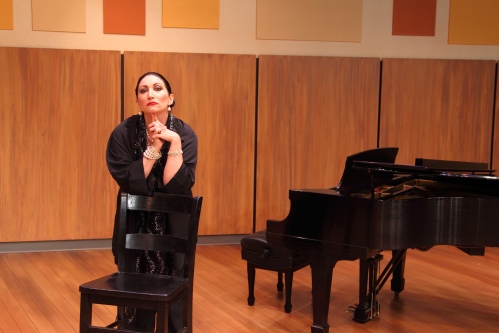 (Dayton, OH) — The Human Race rounds out its 2015-2016 season with the 1996 Tony Award winner for Best Play, Master Class. One of the opera world’s greatest legends takes center stage as Maria Callas gives three aspiring singers a rough introduction to the reality of performing. During a voice master class at the Julliard School, this controversial personality—now in the twilight of her career—remains fearless as she looks back upon her life—the triumphs and heartbreaks, the egos and ambitions, the glories and the scandals. This biographic drama presents a revealing look at a commanding diva and the sacrifice for art.

The production at The Human Race’s downtown Dayton home at The Loft Theatre is directed by Founding Resident Artist Scott Stoney, music directed by Resident Artist Sean Michael Flowers, and features actress Mierka Girten in a long-awaited return as opera’s rebellious diva, Maria Callas. She is joined onstage by Blake Friedman, Cassi Mikat and Jeremy Carlisle Parker as three opera performance students who seek to impress the living legend. Flowers and Stoney double-up in the production with acting roles of their own, Flowers as Callas’ dutiful accompanist on the piano, and Stoney in a cameo as a less-than-impressed stage hand forced to do Callas’ bidding with menial tasks. The preview performance of Master Class is Thursday, June 9. Opening night is Friday, June 10. The production runs through June 26.

Director Stoney took on Master Class with a life-long appreciation for operatic sopranos. “I have always loved high voices,” he states. “I had an obsession with Yma Sumac as a teen and even got to see one of her last concerts. Beverly Sills rips my heart out. The power of Joan Sutherland’s Turandot overwhelms me.” His admiration for Callas, he admits, is more recent. “What a treat to discover Maria’s unique sound as I prepared for this production. I knew her by reputation—‘Diva’—before. Having listened to as many recordings as I could and watched every YouTube clip, I am now a full-fledged fan. She’s a force of nature, as is the actress I have cast in the role.” For that actress, Cincinnati native Mierka Girten, Master Class is a Human Race homecoming. A Wright State University graduate, Girten appeared in productions of Baby, Little Shop of Horrors, Six Women with Brain Death, Bus Stop and Beehive during the theatre company’s early seasons over twenty years ago before settling in Chicago. “The roles she performed in during those early years are a testament to her enormous range and talent,” praises Stoney. “I was sad to lose her when she moved away, but I am thrilled that she’s returning. I know of no other actress more suited to the challenges of recreating Maria Callas on stage.”

Starring as “Maria Callas,” Mierka Girten has performed in the Off-Broadway production of Mistakes Were Made and the national tour of The Secret Garden, as well as at numerous Chicago-area theatre companies. Her original one-woman show, With or Without Wings, chronicles her life with Multiple Sclerosis. She is a founding member of The Mookie Jam Foundation, a not-for-profit organization that raises money for artists with MS to help fund their medical expenses. Playing the roles of Callas’ Julliard voice student “victims” are Jeremy Carlisle Parker as “Sophie,” Blake Friedman as “Anthony” and Cassi Mikat as “Sharon.” Vandalia, Ohio native Parker is a graduate of the University of Cincinnati College-Conservatory of Music who has performed in Always…Patsy Cline (The Palace Theatre and Cortland Repertory Theatre), Guys and Dolls and The Spoilers (Thin Air Theatre Company), and Crumble and Around the World in 80 Days (Ensemble Theatre Cincinnati). Friedman is the current Resident Tenor for American Opera Projects’ Composer and the Voice Symposium and has appeared in Liebeslieder Walzer with New York City Ballet, Van Gogh’s Ear with Ensemble for the Romantic Century, and Barbiere di Siviglia with St. Pete Opera. Mikat appeared in The Human Race’s productions of It’s a Wonderful Life: A Live Radio Show and The Full Monty and recently graduated from Wright State’s Musical Theatre program where she performed in Sondheim on Sondheim, Les Misérables, Into the Woods and South Pacific. Appearing in a rare onstage role as the piano accompanist, “Emmanuel Weinstock,” Sean Michael Flowers is more familiar to Dayton theatre goers for his behind the scenes work as music director for past Human Race productions The Full Monty, Avenue Q and Bat Boy, and as the composer for the musicals Prometheus Dreams, The Trimble Wars, and Guarding Gold Street, and the plays Family Shots and The Retreat from Moscow.

Full biographies on the cast and creative team can be found on The Human Race Theatre Company’s website.

The Human Race Theatre Company’s production of Master Class is sponsored by The Allegro Fund of The Dayton Foundation, the Richard A. and Mary T. Whitney Fund for the Arts, Two Friends, Bill and Jackie Lockwood, the DP&L Foundation, Marion’s Piazza, Discover Classical Radio, Rob and Leesa Comparin and Jack and Maryann Bernstein.

Tickets for the preview performance of Master Class on June 9 start at $35 for adults, $32 for seniors and $17.50 for students. For all performances June 10 – 26, single ticket prices start at $40 for adults, $37 for seniors and $20 for students. Prices vary depending on the day of the week and seating location. Group discounts are available for parties of 10 or more. The Human Race is offering a pair of discount ticket opportunities. Side-area seats are available at all performances for $27 each, on sale two weeks prior to performance. The Sunday, June 12 7:00 p.m. performance is “Sawbuck Sunday”, when any available seat can be purchased in person for just $10 at The Loft Theatre box office two hours prior to the show. Discounts are subject to availability and some restrictions apply.

All performances are at the Metropolitan Art Center’s Loft Theatre, located at 126 North Main Street in downtown Dayton, Ohio. Show times for Master Class are 8:00 p.m. on Wednesday through Saturday evenings. Performances on Sunday and Tuesday evenings begin at 7:00 p.m. and at 2:00 p.m. on Sunday matinees.

Tickets and performance information on Master Class are available at www.humanracetheatre.org or by calling Ticket Center Stage at (937) 228-3630, and at the Schuster Center box office.

The Human Race Theatre Company was founded in 1986 and moved into the Metropolitan Arts Center in 1991, taking up residence at the 212-seat Loft Theatre. In addition to the Eichelberger Loft Season, The Human Race produces a summer Festival of New Works and special event programming. Under the direction of President and Artistic Director Kevin Moore, the company also maintains education and outreach programs for children, teens and adults, as well as artist residencies in area schools, the Muse Machine In-School Tour, and a summer youth program. Human Race organizational support is provided by Culture Works, the Montgomery County Arts and Cultural District, the Shubert Foundation, the Erma R. Catterton Trust Fund, the Jesse & Caryl Philips Foundation, the Virginia W. Kettering Foundation and the Ohio Arts Council, which helped fund this organization with state tax dollars to encourage economic growth, educational excellence and cultural enrichment for all Ohioans. The 2015-2016 Sustainability Sponsors are the ELM Foundation, Anne F. Johnson and Steve and Lou Mason. The 2015-2016 Loft season sponsor is the Jack W. and Sally D. Eichelberger Foundation of the Dayton Foundation, with additional support from Premier Health and Morris Home Furnishings.

One of the opera world’s greatest legends takes center stage as Maria Callas gives three aspiring singers a rough introduction to the reality of performing. During a voice master class at the Julliard School, this controversial personality—now in the twilight of her career—remains fearless as she looks back upon her life—the triumphs and heartbreaks, the egos and ambitions, the glories and the scandals. This Tony Award-winning drama presents a revealing look at a commanding diva and the sacrifice for art.