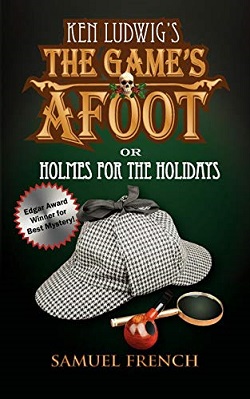 12/1/21 – Dec. 3-5 performances of THE GAME’S AFOOT have been cancelled due to a COVID case in the cast. We are still hoping to go ahead with the Dec. 10-12 shows or, if needed, to reschedule the performances to January. Information will be updated once plans are finalized.

Breathtaking mystery and high hilarity in equal parts, this play tells the story of Broadway star William Gillette, who has invited his fellow cast-members to his Connecticut castle for a weekend of revelry. But when one of the guests is stabbed to death, the festivities in this isolated house of tricks and mirrors quickly turn dangerous. Then it’s up to Gillette himself, who just happens to think he’s Sherlock Holmes, to track down the killer before the next victim appears. The danger and laughter are non-stop in this glittering whodunit set during the Christmas holidays.

Meals will not be served before the performances due to COVID safety precautions.

Auditions Announced for THE GAME’S AFOOT at St. Paul Players

Summary:
It is December 1936. And Broadway star William Gillette, admired the world over for his leading role in the play Sherlock Holmes, has invited his fellow cast members to his Connecticut castle for a weekend of revelry. But when one of the guests is stabbed to death, the festivities in the isolated house of tricks and mirrors quickly turn dangerous. It is then up to Gillette himself, as he assumes the persona of his beloved Holmes, to track down the killer before the next victim appears. The danger and hilarity are non-stop in this glittering whodunit set during the Christmas holidays.

3 males 5 females
Auditions consist of cold readings from the script.
Note: In the show there will be gunshots, on stage fight scenes, and stage kissing. 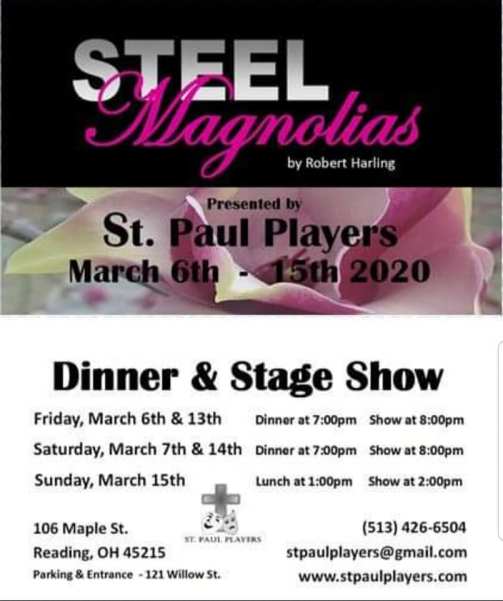 Statement from Nick Huitger, Artistic Director: “Amid the chaos currently unfolding with the COVID-19/Coronavirus this weekend performances of STEEL MAGNOLIAS are still currently going on as planned. We are taking extra precautions to sanitize our space after each performance. If you are feeling 100% and would still like to join us, we welcome your presence . Thank you, St. Paul Players”

STEEL MAGNOLIAS is a touching, comedy-drama that shows the healing power of laughter and friendship. As the women of Chinquapin, Louisianna gather to get their hair done in Truvy’s hair salon, they gossip and trade opinions about every day life. The women find strength and comfort in one another as they deal with life’s struggles, often through a fair amount of verbal ribbing.

Auditions Announced for THE CURIOUS INCIDENT OF THE DOG IN THE NIGHT-TME at St. Paul Players

St. Paul Players announce auditions for their June production, THE CURIOUS INCIDENT OF THE DOG IN THE NIGHT-TME, based on the novel by Mark Haddon. Adapted by Simon Stephens.

Auditions consist of cold readings from the script.

SYNOPSIS
15 year-old Christopher has an extraordinary brain:  He is exceptional at mathematics but ill-equipped to interpret everyday life.  He has never ventured alone beyond the end of his road, he detests being touched, and he distrusts strangers.  Now it is 7 minutes after midnight and Christopher stands beside suspicion, Christopher is determined to solve the mystery of who murdered Wellington, and he carefully records each fact of the crime.  But his detective work, forbidden by his father, takes him on a thrilling journey that upturns his world.