Straight From London, Cincinnati Playhouse To Bring Exclusive Engagement of THE LION Nov. 12 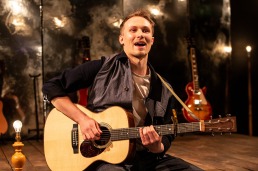 Photo of Max Alexander-Taylor in THE LION at the Southwark Playhouse in London. Photo by Pamela Raith.

CINCINNATI PLAYHOUSE WILL BRING AN EXCLUSIVE ENGAGEMENT OF THE LION STRAIGHT FROM LONDON TO THE WARSAW FEDERAL INCLINE THEATER NOV. 12

CINCINNATI (Oct. 31, 2022) — THE LION, an acoustic storytelling event, comes from the London stage for an exclusive engagement with Cincinnati Playhouse in the Park beginning Nov. 12. The genre-redefining musical will run through Dec. 4 at Warsaw Federal Incline Theater in Price Hill. Opening night is Nov. 17.

Written and originally performed by Benjamin Scheuer, THE LION is a story of love, loss and ultimately, hope that premiered off-Broadway in 2014 and then toured the U.S. and the U.K. for over 500 performances. This revival, directly from London, features Max Alexander- Taylor as Benjamin, the show’s musician-storyteller. The new production was hailed by WhatsOnStage as “an incredibly life-affirming theatrical experience.” Musical Theater Review called the revival “a rare and beautiful gem.”

“Unusually for a musical, this piece has a real intimacy and directness with an audience, and we’ve directed the show to be far more live and spontaneous than is often possible to be with a large ensemble or orchestra…THE LION is an exciting example that musicals can be small, subtle, sincere and stripped right back to just a person in a room telling a brilliant story,” said Alex Stenhouse, who also co-directs the Playhouse engagement with Sean Daniels.

The turbulent story in the musical begins with a boy named Benjamin, whose father loved music and writing folk songs. An unexpected event sends shock waves throughout the family, splintering Benjamin’s relationship with them into adulthood. When he experiences a brush with his own mortality, the audience sees Benjamin summon the courage to weather the storm.

“…to be bringing our production to Cincinnati this year is so surreal and a truly special experience,” Stenhouse continued. “We’re so proud of it, and we can’t wait for you all to see what we’ve been cooking up across the pond.”

Due to construction, the Playhouse’s Eden Park facility is temporarily closed. Performances of THE LION will take place at The Warsaw Federal Incline Theater in Price Hill: 801 Matson Pl, Cincinnati, OH 45204.

To purchase tickets or for more information, call the Playhouse Box Office at 513-421-3888 (toll-free in Ohio, Kentucky, and Indiana at 800-582-3208) or visit http://www.cincyplay.com. Patrons who are deaf, hard-of-hearing, deaf-blind or speech disabled: dial 711 to connect to the Box Office via Ohio Relay Services.

THE LION is suitable for ages 12 and up. This heartrending yet uplifting story about one man’s personal journey through loss, illness and relationship challenges includes mature themes and some amazing music. We recommend you bring tissues.

The Playhouse is supported by the generosity of almost 40,000 contributors to the ArtsWave Community campaign. The Ohio Arts Council helps fund the Playhouse with state tax dollars to encourage economic growth, educational excellence and cultural enrichment for all Ohioans. The Playhouse also receives funding from the Shubert Foundation.