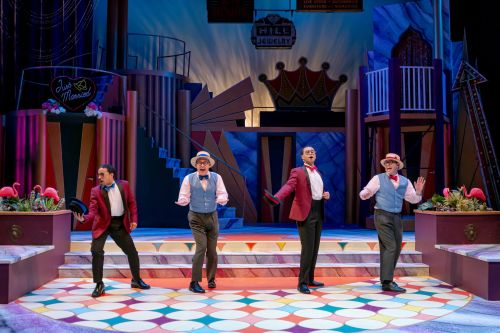 In CSC’s production of Shakespeare’s screwball comedy, the “City of Lost Wages” becomes the city of lost brothers and diamond rings

Cincinnati, April 6, 2022 – Cincinnati Shakespeare Company continues its 2021-2022 Season at The Otto M. Budig Theater with Comedy of Errors. Jeremy Dubin directs this production, featuring a cast of 14 with CSC returning favorites Justin McCombs as Dromio of Syracuse, Cary Davenport as Dromio of Ephesus, Crystian Wiltshire as Antipholus of Syracuse, and the debut of Charles Gidney, who plays Wiltshire’s twin, Antipholus of Ephesus. The design of this show is generously sponsored by Messer Construction, Judge Mark and Sue Ann Painter, and Pete and Ginger Strange.

What do you get when you mix love triangles, a jealous wife, a vindictive mistress, a deranged doctor, and not one but TWO sets of identical twins separated at birth? Well, it can only be The Comedy of Errors. Shakespeare’s silliest, screwiest, and slapstickiest comedy returns to the CSC stage, this time with a Sin City twist. Inspired by golden era Las Vegas, this music-filled production will be packed with cool cats, rat packs, showgirls, wise guys, and more!  So place your bets, roll the dice, and check it out, but remember- what happeneth in the theater, stayeth in the theater.

One of CSC’s most acclaimed actors and directors, Jeremy Dubin, returns to the director’s chair, ready to channel the screwball energy of American slapstick comedies. As Dubin describes, think of Roadrunner and other iconic, silly classics. Jeremy has directed CSC’s smash hit holiday comedy “Every Christmas Story Ever Told” for over a decade and is sure to bring the laughs to this production!

Comedy of Errors runs April 8 – April 30, 2022, with performances on Thursdays, Fridays, and Saturdays at 7:30 PM and Sundays at 2:00 PM. Preview performances are on April 6 and 7, with YP Preview Night on April 6. Tickets are on sale now. There are discounts available for students, seniors, local residents, and community partners as access to all is important to CSC. Each performance night has a limited number of $14 “Access” tickets in the Upper Gallery.  These can be purchased in advance by going online or calling the Box Office.  And starting 1 hour before each performance, any unreserved tickets may be available as a discounted Rush Ticket to anyone, not just students. These tickets are only $12 and could be located anywhere in the house depending on that evening’s availability. These cannot be reserved more than 1 hour before a show and must be purchased in person in the Box Office. Visa, Discover, MasterCard, and American Express are accepted. Ticketing fees apply.  To purchase tickets or for more information, call the CSC Box Office at 513.381.BARD (2273) ext. 1, or go online at www.cincyshakes.com.

As of April 1st, audience members will no longer be required to show proof of vaccination or a negative COVID-19 test to attend performances at Cincinnati Shakespeare Company, and the wearing of masks will be encouraged, but optional.

Cincinnati Shakespeare Company is located at The Otto M. Budig Theater at 1195 Elm Street in OTR, adjacent to Washington Park.  Many parking spaces are available on the street and in nearby lots and garages- for more information, visit http://www.otrchamber.com/pages/WheretoPark.

CSC also offers Valet Parking for every performance! Make reservations in advance when purchasing tickets or visit www.cincyshakes.com/parking. Purchasing in advance guarantees a spot.  Valet is available right at the corner of 12th and Elm Street in front of the theater and begins approx. 1.5 hours before a performance. Cars can be picked up for up to one hour following a performance.