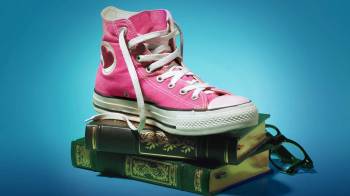 (Cincinnati, OH) Throw out that glass slipper and break out your library card! Ensemble Theatre Cincinnati (ETC) revives one of its most treasured family-friendly holiday musicals, Cinderella, by local playwright Joseph McDonough with lyrics by David Kisor and music by Fitz Patton, playing December 1-30, 2021. In the tradition of ETC’s “fractured fairytale” holiday productions, Cinderella is a modern spin on the classic folk tale. This revamped production features a magical set design, enchanting comedy, and the opportunity to see true beauty through new eyes (or glasses). Directed by D. Lynn Meyers. Premiere Sponsor is The Schueler Group. Artist Sponsor is Messer.

What do you get when you combine a nearsighted bookworm heroine, two fabulously self-absorbed stepsisters, one devilishly diva stepmother, along with a self-empowering Well-Wisher? A fun spin on the classic fairy tale that demonstrates having an open heart and a curious mind is true beauty! When the King pressures his romantically challenged son to choose a bride from hundreds of “applicants,” a cross-country tour of the kingdom ensues to reunite a missing sneaker—yes a sneaker!—with its rightful owner. This heartwarming musical will delight audiences of all ages this holiday season.

“Cinderella sends a message that inner beauty, strength, and intelligence are the keys to success,” says ETC’s Producing Artistic Director D. Lynn Meyers. “It’s about finding the better part of yourself and using the rest of your life to celebrate it. It’s a delightful story that will bring laughter, hope, and smiles to both adults and children. It was an easy choice to do this show right now. We can all use a little joy and hope.”

Mask and Vaccination Requirements
ETC requires all patrons and visitors to provide proof of COVID-19 vaccination or negative test certification and to wear face masks at all times while on the premises. For full health and safety policy information, visit our website at www.ensemblecincinnati.org/health-safety.

About the Cast
Brooke Steele (Cinderella) has appeared numerous times at Ensemble Theatre, most recently as Vasilisa in The Frog Princess. Some of her favorite ETC credits include Fly by Night, Violet, Cinderella, and The Marvelous Wonderettes. When not performing, she teaches with Community Arts Initiatives.

Patrick Earl Phillips (Prince Frederick) received his BA in Theatre from Xavier University and was an Acting Intern at ETC during the 2014-2015 Season. He was last seen at ETC in The Frog Princess, as well as Fly by Night, This Random World, Bloomsday, Violet, and Luna Gale. Other regional credits include productions with Cincinnati Shakespeare Company, Know Theatre of Cincinnati, Human Race Theatre Company, and Arrow Rock Lyceum Theatre.

Michael G. Bath (King Frederick) returns for his 24th consecutive holiday show with Ensemble Theatre, where he has also appeared in The Frog Princess, Fly By Night, The Dancing Princesses, The Legend of Georgia McBride, Sleeping Beauty, and Hands on a Hardbody, among others. Other regional credits include Superior Donuts with Clifton Players and Angels in America at Know Theatre. Michael has also performed with Cincinnati Playhouse in the Park, Children’s Theatre of Cincinnati, the Performance Gallery, Showboat Majestic, and Stage First Cincinnati.

Darnell Pierre Benjamin (Gaston) has been seen at Ensemble Theatre in The Legend of Georgia McBride, Detroit ’67, and many holiday shows. Darnell has been a professional performing artist, director, choreographer, educator, and activist for over 15 years. He works as a professor in the arts programs at Northern Kentucky University and College-Conservatory of Music and is also an active board member with Caracole, Pones, Stop the Stigma Productions, and Treehouse Cincinnati.

Deb G. Girdler (Brunhilda) has appeared numerous times on Ensemble Theatre’s stage, often as the villain in the holiday shows. Some of her ETC credits include The Dancing Princesses, Cinderella, Hands on a Hardbody, Around the World in 80 Days, Sleeping Beauty, Alice in Wonderland, The Great American Trailer Park Musical, and The Frog Princess. Deb has appeared at the Olney Theatre as the Fairy Godmother in Rogers and Hammerstein’s Cinderella, as well as in La Cage Aux Folles at the Gateway Playhouse in New Jersey. She can be seen in the feature films Carol and First Kill. A CCM graduate, she began her career on the Showboat Majestic and has worked off-Broadway, in regional theatre, and in summer stock for over 30 years.

Sara Mackie (Priscilla) is an alumna of the Wright State Acting BFA Program. She performed with Ensemble Theatre most recently in The Frog Princess, Fun Home and many other productions since 1999, including Hands on a Hardbody, all three Wonderette iterations, Rabbit Hole, and Mauritius, among others. Some of her other credits include An Act of God, Family Ties, Twelfth Night, Human Race Theatre; Pride and Prejudice and Romeo and Juliet, Cincinnati Shakespeare Company; Pump Boys and Dinettes, The Carnegie; and Frankie and Johnny in the Claire de Lune, New Edgecliff Theatre. You can also catch her briefly in the feature films The Public and Dark Waters.

Torie Wiggins (Clarissa) is a graduate of the University of Cincinnati’s College-Conservatory of Music with a BFA in Dramatic Performance and has been performing professionally for over 15 years. She has co-adapted and performed a one-woman show, Your Negro Tour Guide, at various venues across the country. Her film work includes A Christmas Melody, The Old Man and the Gun, and Extremely Wicked, Shockingly Evil and Vile. Some of her Cincinnati credits include Collapse, Afghan Women Writer’s Project, and Pluto, Know Theatre of Cincinnati; The Mountaintop, Violet, and His Eye is on the Sparrow, Ensemble Theatre; Twilight: Los Angeles 1992, Diogenes Theatre Company; Mame and Crowns, Human Race Theatre; and A Raisin in the Sun and Fences, Cincinnati Shakespeare Company, and To Kill a Mockingbird with both Playhouse in the Park and Cincinnati Shakespeare Company.

Kate Wilford (Gwendolyn) has appeared in ETC’s productions of Alice in Wonderland, Violet, Luna Gale, Becky’s New Car, Good People, Dead Man’s Cell Phone, and many others. She has appeared at Cincinnati Shakespeare Company in August: Osage County and All the Way and A Prayer for Owen Meany with Cincinnati Playhouse in the Park. Regionally, she has also worked at The Lyceum Theatre, Beef N Boards, Westgate Theatre, The Kenley Players, and was a founding member of The Troupe in Cincinnati as well as directed at Xavier University, Thomas More College, and Cincinnati Children’s Theatre.

Rounding out the ensemble cast are this season’s acting apprentices Rachel Barkalow (Aristotle the Crow), Christian Hall (Plato the Toad), and Abby Palen (Socrates the Spider).

Performance Information
Performances are on Tuesday-Saturday at 7:00 pm; Saturday and Sunday at 2:00 pm. Performances vary. A complete calendar of performances is available at www.ensemblecincinnati.org.

Ticket Prices
Tickets start at $52 for adults; student tickets are $28; and children are $24. Half-Price Rush Tickets: All remaining tickets for the current day’s performance(s) are available two hours prior to each show time for half-price (discount only applies to adult tickets) when purchasing by phone or in person. $15 Student Rush Tickets: Students may purchase up to two $15 student rush tickets two hours prior to show time with valid student I.D. Available in person only.

DISCOUNTS
Half-Price Rush Tickets: All remaining tickets for the current day’s performance(s) are available two hours prior to each show time for half-price (discount does not apply to children’s tickets) when purchasing by phone or in person.

$15 Student Rush Tickets: Students may purchase up to two $15 student rush tickets two hours prior to show time with valid student I.D. Available in person only.

Ensemble Theatre Cincinnati is supported, in part, by the generosity of community contributions to the ArtsWave Campaign.

Ensemble Theatre Cincinnati is a professional theatre dedicated to producing world and regional premieres of works that often explore compelling social issues. We fulfill our mission through our stage productions and educational outreach programs that enlighten, enliven, enrich and inspire our audiences.