Tonight is the second night of Fringe performances, but my first due to a “magic carpet ride” last night.

My first show of the 2018 Fringe is THE WHITEST BABY IN ALL OF AFRICA. This FringeNext entry is created and produced by local high school students. Sam Kerns serves as the visionary and director, while Kealy Welage serves as producer of Welage & Kerns Productions. 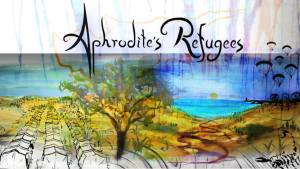 A quick jog up two floors takes me to my second show, the world premiere of APHRODITE’S REFUGEES, from new participant MonTra Performance out of Bolder, Colorado:

Animation, storytelling & live art come together In APHRODITE’S REFUGEES to paint a dreamlike picture of a young Cypriot refugees as he and his family flee from their home. All while the ancient Greek Gods play a high-stakes game of cards. Developed from interviews from Cypriot refugees, APHRODITE’S REFUGEES was created by Monica Dionysiou, featuring visual artist Aaron Young. A portion of proceeds will be donated to Doctors Without Borders.

You can watch the trailer below:

Rounding out the hat trick for the evening is OF MONSTER DESCENT, this year’s entry by the local group Queen City Flash.

Writer/Director team Trey Tatum and Bridget Leak (SLUT SHAMING 2014 Artist Pick of the Fringe, THE DISAPPEARNCE OF NICOLE JACOBS) present a story about a family on the brink of collapse and the woodland beast that stalks just beyond their fence line. Set in a decaying Gulf Coast oasis, a young boy confronts family legacy and the untamed beyond in this otherworldly, lightning-lit, monster survival tale.

I hope you have a chance to make it down to Over-the-Rhine and catch a show or ten. Feel free to say hello. Happy Fringing.