THE HALF-LIFE OF MARIE CURIE presented by Falcon Theatre through Oct. 8. I attended the opening night performance. 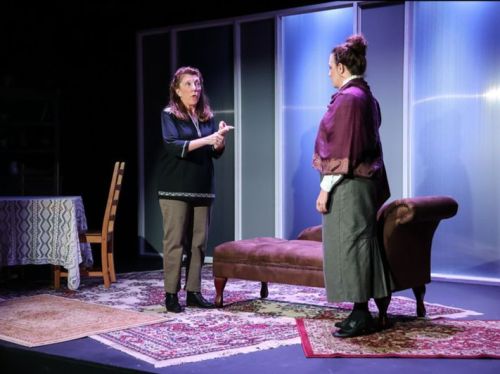 Falcon Theatre kicks off their season with a work by the prolific and oft-produced playwright Lauren Gunderson. This two-person show features Tara Williams as the titular character and Tracy Schoster as fellow scientist and friend, Heartha Ayrton.

The two have an easy chemistry and their personal years-long friendship serves their onstage relationship well as Heartha rushes to her friend’s side during one of the darkest times in Curie’s life. With Ayrton having the stronger personality, I did feel there were times, particularly in their first scene together, where she was talking “at” instead of “to” her friend. I’m all about the snark, but the tone could have been lightened here and there. 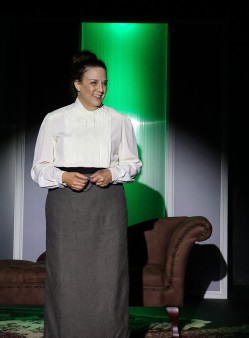 There were times when the blocking became a bit stagnant with extended periods of sitting, especially in the first scene that was confined to a small play space.

Of the Gunderson plays I have seen, this script lacks the depth I am used to finding in her other works. Perhaps it is because this is a commissioned work and was not created as organically. With only two characters, aside from a well-acted disagreement halfway through the performance, there is little conflict between the two, resulting in grievances aired against those not present.

A couple of choices did impact my ability to be pulled into the story. While I’m not expecting expensive and elaborate time-period appropriate costumes, Ayrton’s styling and costume seem to be decades outside of the time frame of the play. I also question the decision to forego the use of accents. In this day of representation, it seems ill-advised to eliminate an integral part of each character’s identity, in a way “Americanizing” their story.