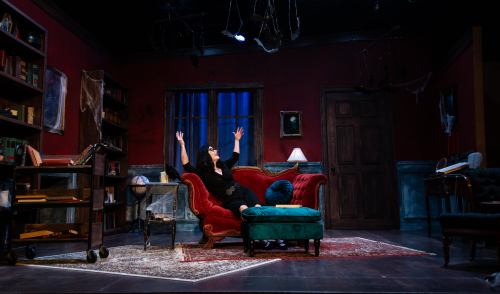 SHOCK! The Spine-Tingling Tale of Miss Spidra presented by Know Theatre of Cincinnati through Oct. 24. I attended the opening night performance.

The script by Joseph Zettelmaier is smart, laugh-out-loud funny and does a great job of capturing the time period. The scenes from the ’50s are intercut with video interview segments where an older “Miss Spidra” reminisces about her career as a horror host. Director Andrew Hungerford shows a deft hand in the tone and pacing of the production. A couple moments of blocking pulled me out of the moment, but this would be a very minor complaint.

Paul Riopelle is pitch-perfect as Ray Coslaw, the beleaguered local TV executive working to mimic the late-night success of other cities that have hopped on the horror-host craze. Tess Talbot shines as Joyce Billings, aspiring actress (and Ray’s sister-in-law) who reluctantly signs on as the hostess, fighting to make her character more than another vamp of the night. The chemistry between these two actors is central to the success of the production.

Brianna Bernard rounds out the on-stage cast as Lucy Lupnicki, the young sidekick brought in to keep the show “fresh.” She handles the arc of the character very well as Lucy learns the ropes of the local TV industry. Talbot’s real-life mother, Terry Neumann, does a nice job as the older Joyce in the video segments. Also Daniel Winters has a fun video cameo as local politician Oglesby. 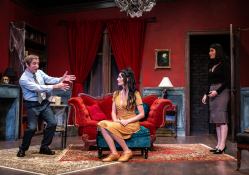 The technical aspects of the show worked well. The video was enjoyably produced and felt like a modern-day documentary thanks to director of photography Ryan Lewis. Resident costume designer Noelle-Wedig-Johnston did a great job of capturing the look of the ’50s and in the creation of Miss Spidra’s look. The set and props design by Kayla Williams define the two performances spaces well. I did feel the bookcases looked a bit unadorned for the TV set and I couldn’t find the gargoyles mentioned during the interview. Speaking of things mentioned in the script, it would have been fun to see the dry ice fog roll in for Miss Spidra’s debut. [Director Andrew Hungerford kindly informed me that, as with many things, there is currently a dry ice shortage, so kindly ignore my last sentence. –Rob] Again, I’m just being picky. 🙂

Overall a wonderful return to live performances and a very enjoyable, nostalgic look back to the early days of local television.