KSO Concert in Person and Virtual this Saturday

The Kentucky Symphony Orchestra opens its 29th season in an industrial warehouse with a Halloween mix of string classics that should provide a good scare for musicians and audience alike. Keeping musicians employed and playing during the Covid crisis requires following safety guidelines that are nearly impossible to enact with in traditional auditorium settings (visit kyso.org for safety guidelines). However, since the KSO possesses the will, it certainly has found a way, by turning to unconventional spaces. Verst Group Logistics generously offered the Symphony use of its Hebron warehouse with the square footage of a football field and 40’ ceilings to address adequate distancing and circulation concerns. Even the City of Bellevue helped out for a single rehearsal at the former Joe’s Crab Shak to assist with its season opening program dubbed Strings Noir.

The black and white Film Noir genre of 1940s-60s was characterized by its foreboding fatalism and menace. The KSO’s Strings Noir selections capture a similar aura and mood for All Hallows Eve. “String instruments have the ability to create a sublime beauty and then shift the mood and character to abject terror. The audience will experience all emotions in this program,” commented KSO Music Director and founder James Cassidy.

With the third suite of his Ancient Airs and Dances, composer Ottorino Respighi transcribed 17th century lute music for strings that reflects a distant, poignant melancholy. Arnold Schönberg’s Verklärte Nacht loosely follows Richard Dehmel’s poem describing a man and woman’s late night walk through a grove and the revealing of a deep dark secret. In 2018 The Florida Orchestra teamed up with visual artist Geff Strik to paint a work of art based on Schoenberg’s music and the poem. The result was a 5’x12’ oil on canvas painting. Strik’s painting process was captured on video and edited to simultaneously project over the orchestra as it performs Transfigured Night. (See more about the project below)

After a brief intermission, the strings return with a suite from Bernard Hermann’s film score to the Alfred Hitchcock classic Pyscho, starring Janet Leigh and Anthony Perkins. The infamous murder scene with the slashing glisses in the upper strings represent the KSO’s trick and the audience’s treat. The program concludes with Ludwig van Beethoven’s fiendishly difficult Grosse Fuge. Beethoven turns 250 in December, and the KSO celebrates the composer’s great music and continued relevance with this late enigmatic, rarely performed tour de force arranged for string orchestra.

The KSO invites everyone to come out on Halloween for a unique live concert. Distanced seating is limited to 300. Don your favorite mask, and know that the KSO is committed to safety and keeping the energy and spontaneity of in-person performance alive and well in Northern Kentucky. Tickets for each show this year remain where they have been for several years at $35 to experience great musicians, guest artists and innovative programming unique to our region. For those who need to stay home, the KSO is live streaming each concert (via multiple cameras) for your ‘at home access’ for the price of a single ticket. Subscribers to all five shows get in-person, flexible use and access to livestreams with a 14% savings. Tickets are available online at kyso.org, by phone (859) 431-6216, or at the door.

The KSO’s 29th season continues with the following programs November — May: 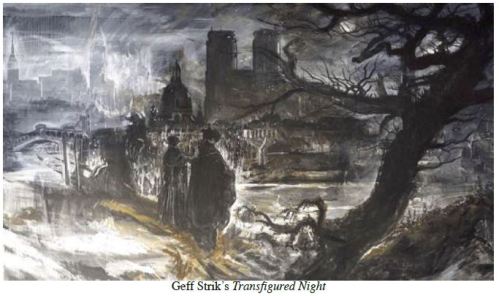 Geff Strik‘s Verklärte Nacht is a live musical performance of Arnold Schoenberg’s Verklärte Nacht accompanied by a 28-minute dramatic short film of paintings done in real-time to the music. The paintings are inspired by the music and Richard Dehmel’s poem of the same name, which is also part of the video. The poem details a dark romantic story set in the 19th century. It begins, “Two figures pass through the bare, cold grove/the moon accompanies them, they gaze into it.”

The story comes alive on canvas as Geff depicts 18 key scenes from the music and poetry. Using only one canvas, he layers each scene in oil with a final layer of lacquer to seal in each scene. This is purposely done since the collective scenes are to be seen as layers of memories. Each layer can be taken off revealing the history and previous scene. The final painting shows the finale, but we know that underneath there is more than meets the eye.

Strik, a French-born painter, collaborated with videographer Joey Clay. The work was commissioned and premiered in 2018 by The Florida Orchestra with Michael Francis conducting.