THE AGITATORS to Open as Falcon Theatre’s Latest Production 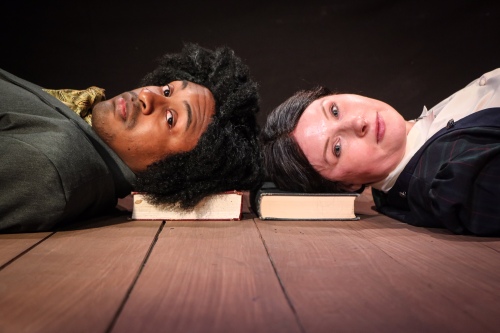 For forty-five years, they agitated the nation and each other. They met in the 1840’s as young abolitionists, full of hopes and sharing a common purpose. They became cultural and historical icons. They were Susan B. Anthony and Frederick Douglass. Their tempestuous decades-long friendship is the subject of THE AGITATORS by playwright Mat Smart, the fourth production of Falcon Theatre’s 30th Anniversary season, opening March 20, 2020.

Anthony and Douglass found a common cause in the abolition of slavery, though each came at the subject from a different standpoint. She was white, a Quaker. He was black, an escaped slave. Both used their gifts as writers and orators, along with their shared passion for equality to forge an unlikely friendship. When slavery ended after the Civil War, the two focused on what they hoped would be universal suffrage. Their friendship and alliance became strained with the proposal of the 15th Amendment, which would grant voting rights to black men, but not to women of either race.

Playwright Smart sees the story of the pair as timely for 21st Century America. “The distance between people in this country seems to be growing greater and greater,” Smart says. “And something that is so inspiring to me about Susan and Frederick was their ability to have a healthy, hard dialogue with the people they disagreed with…with the people who hated them. So I hope a lesson we can take from them is how we can better listen to people who believe different things than we believe, and how we may better agitate the people who disagree with us to change their thinking. Or vice versa.”

The Gazette calls THE AGITATORS “…theater at its best. Teaching us, challenging us, reminding us of where we’ve been, where we are, and how far we still have to go.” The St. Louis Post-Dispatch calls it “theater at its most provocative and enlightening.” The Democrat & Chronicle says “THE AGITATORS opens a window into two extraordinary lives while also holding up a mirror to all of us. It portrays the gift of friendship, while reminding us we need to pass the olive branch along.”

Falcon’s production is directed by Darnell Pierre Benjamin and features Cat Cook as Susan B. Anthony and Elliott Young as Frederick Douglass. Performances are at 8 PM on March 20, 21, 26, 27, and 28 and on April 2, 3, and 4, 2020. Tickets prices are $25 for adults and $15 for students with ID. Patrons enjoy a $5 discount for Thursday performances. Visit falcontheater.net for tickets.